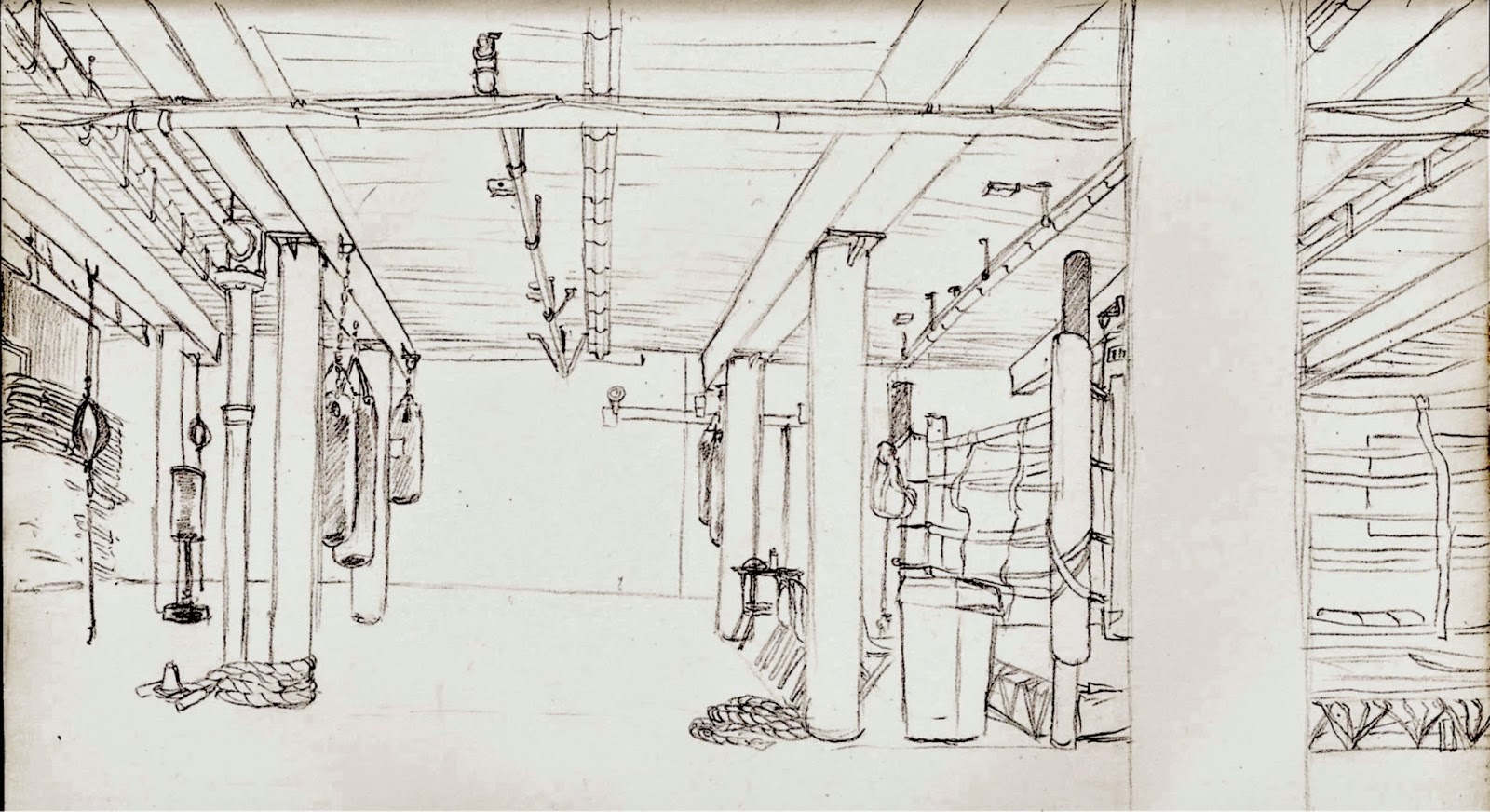 Continuing the "lessen the effects of seasonal depression with drawing and sweating" endeavor.
Posted by Alison Blackwell at 11:35 AM No comments: 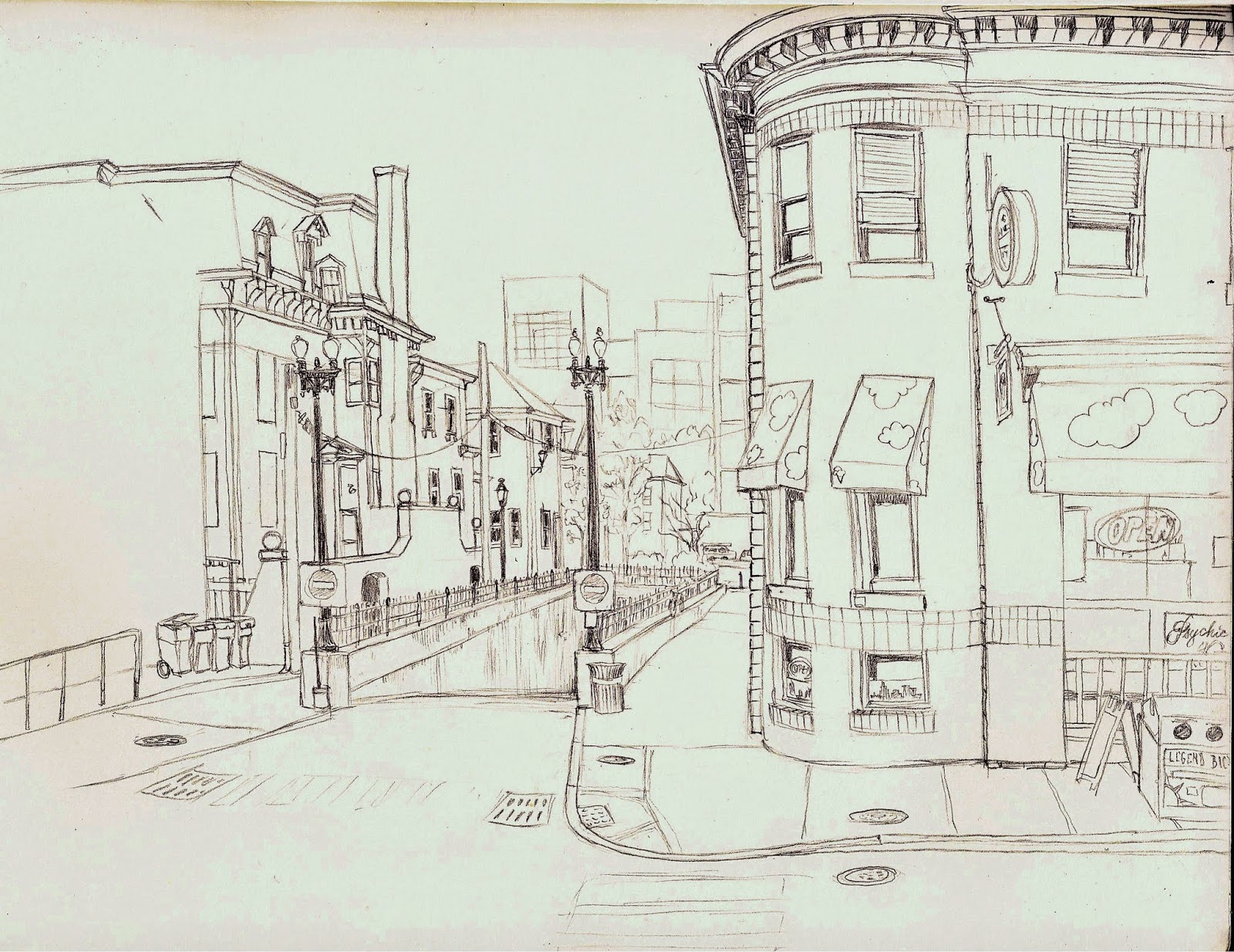 It's November now, which means the sun sets at 4:30 or earlier, and it's starting to get bitterly cold. I usually have a tough time with seasonal depression, or "the seasonals," so this year, since I know it's coming, I'm going to try and manage it by doing a lot of fitness and a lot of drawing practice. Today I went outside during midday and sat myself down at a coffee shop to draw. I find that since I take a long time to draw things, the shadows move on me and sometimes it gets too dark for me to finish. This time it was the opposite. I didn't finish the left side because the sun had set to just above the building, so I couldn't make it out from the glare in the window where I was sitting. Something to keep in mind for next time, I guess!
Posted by Alison Blackwell at 12:58 PM No comments: 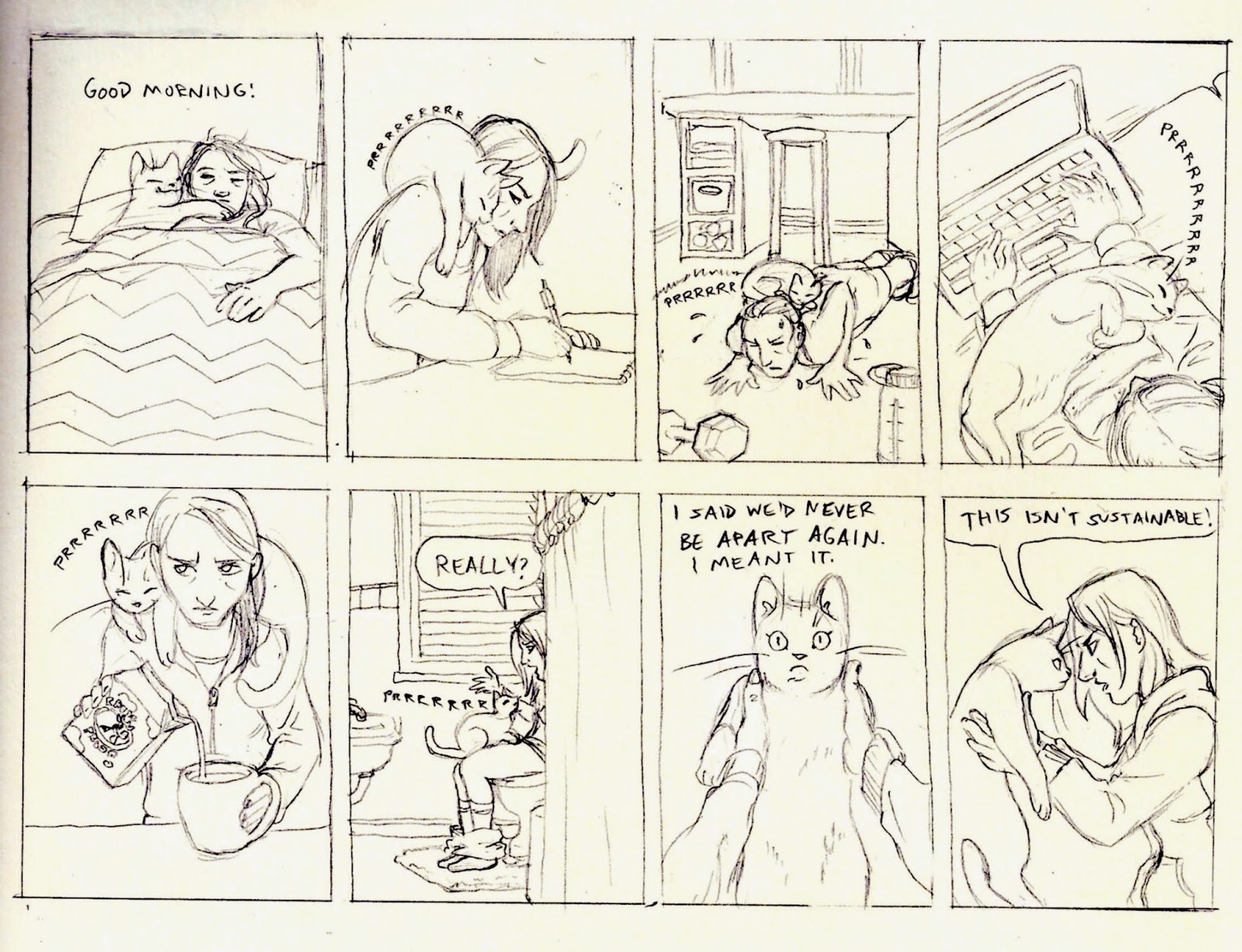 Posted by Alison Blackwell at 7:31 AM No comments: 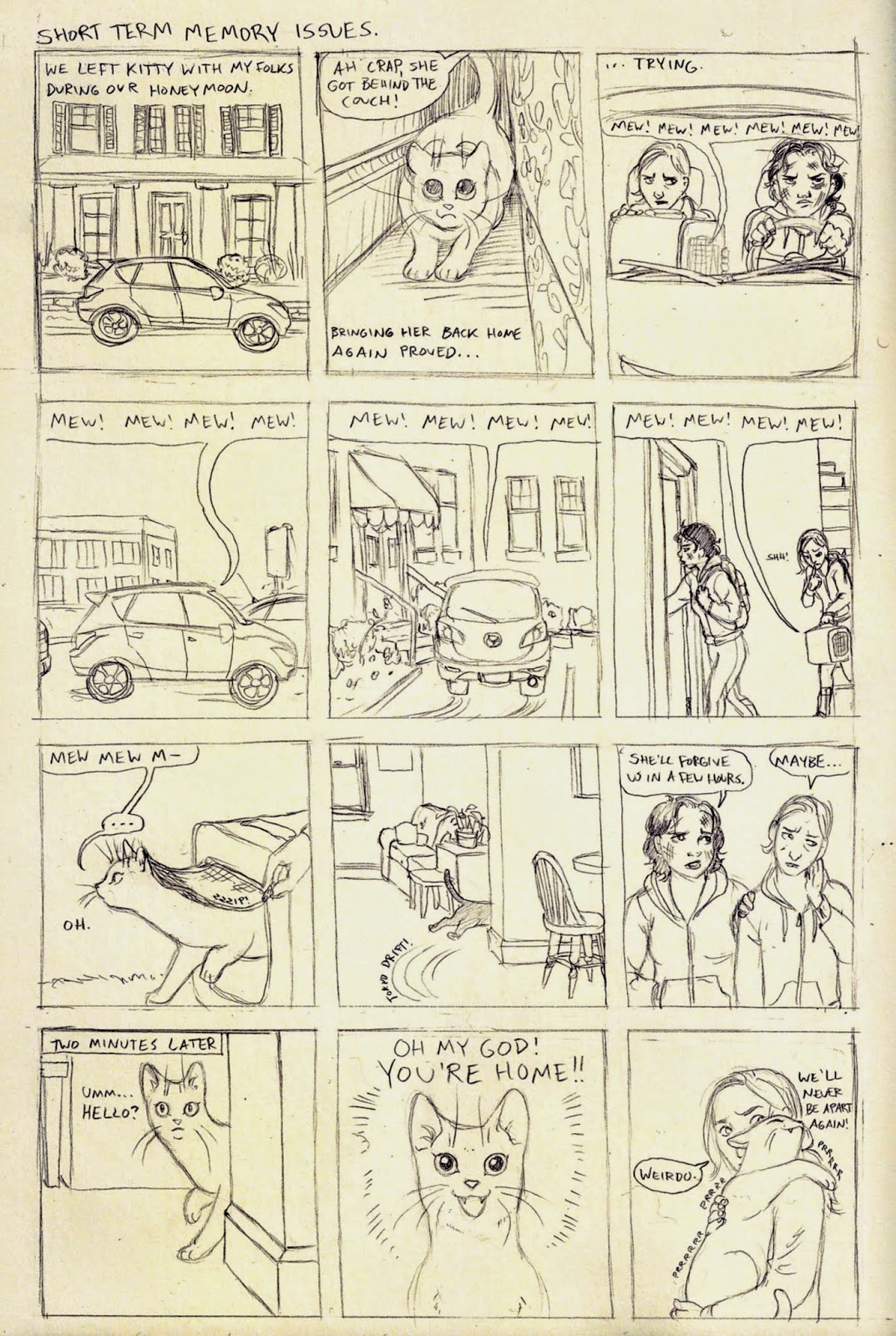 Posted by Alison Blackwell at 7:20 AM No comments:

Posted by Alison Blackwell at 11:03 AM No comments: 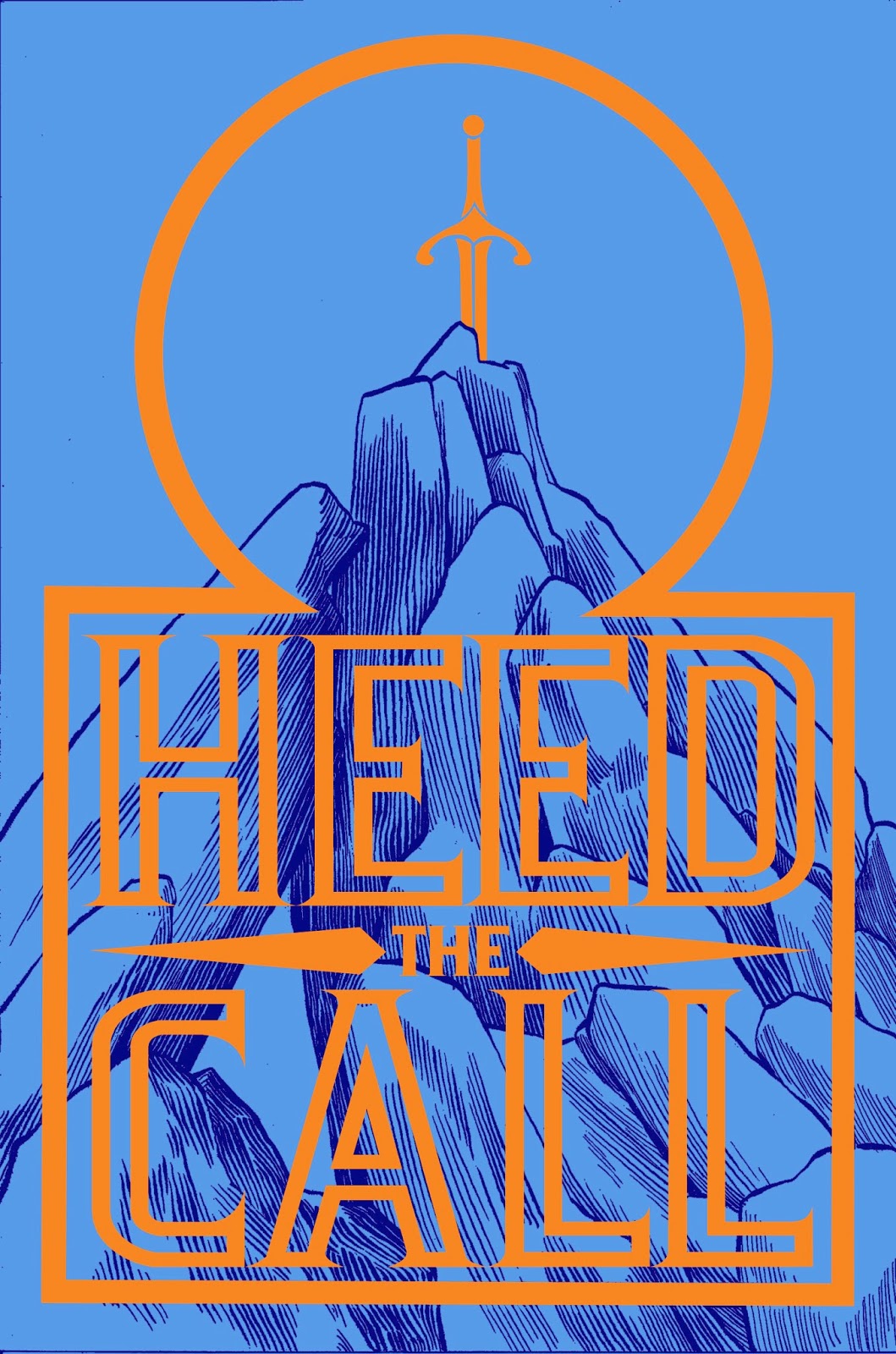 Posted by Alison Blackwell at 11:45 AM No comments: 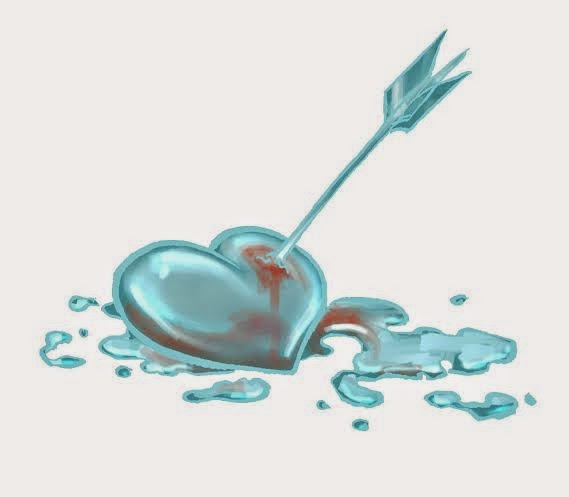 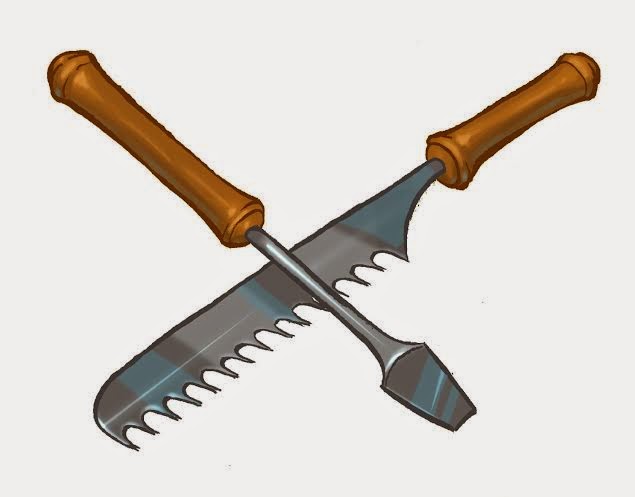 Just finished some spot illustrations for an upcoming Providence Monthly issue- The annual Halloween short story! Should be a fun one; pick it up for a good read!
Posted by Alison Blackwell at 2:47 PM No comments: 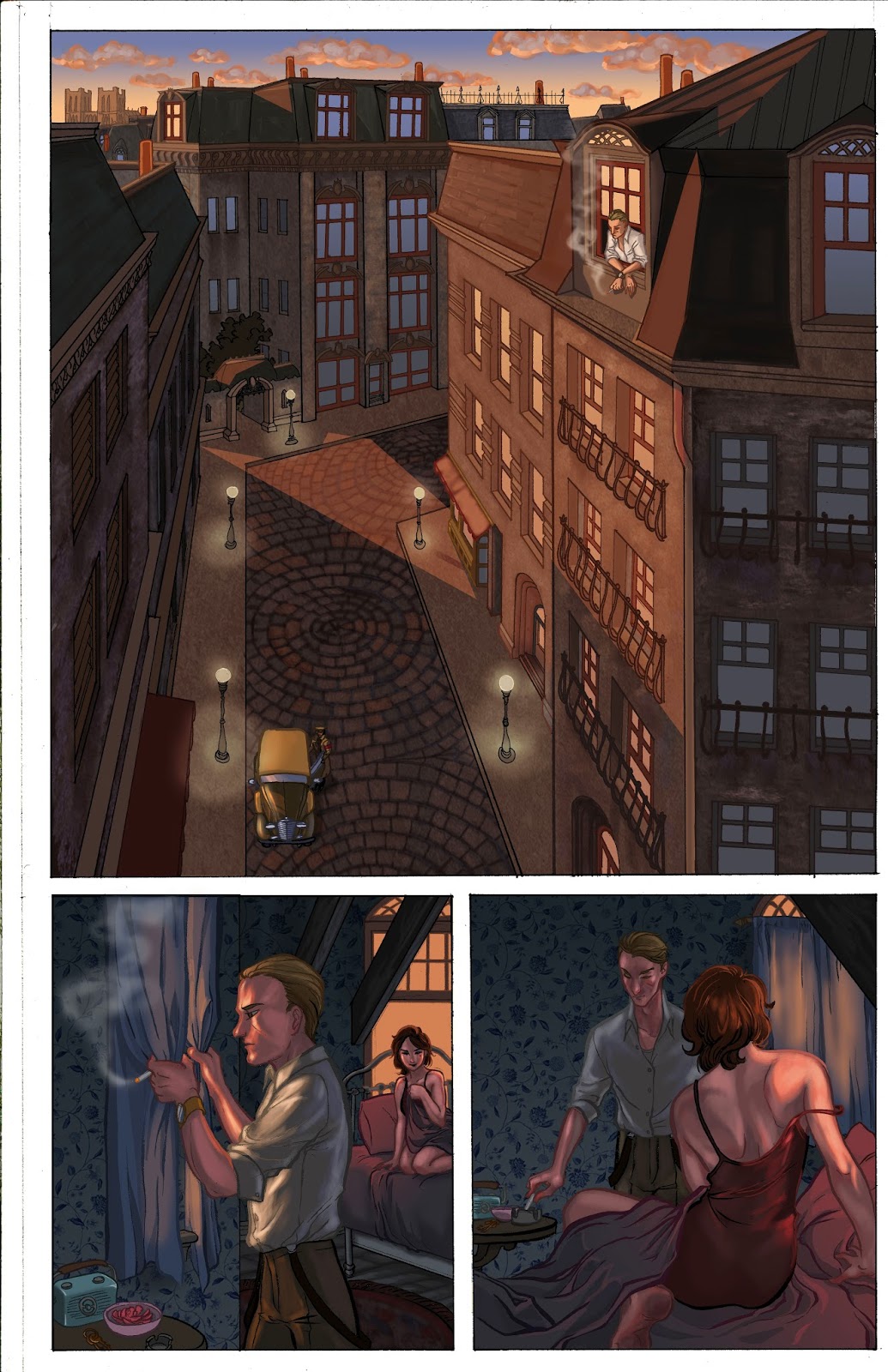 Took the opportunity to finish up a page from last summer. I have a lot of half-finished stuff lying around; it'd be great to go back and work into it.

Posted by Alison Blackwell at 8:49 AM No comments: 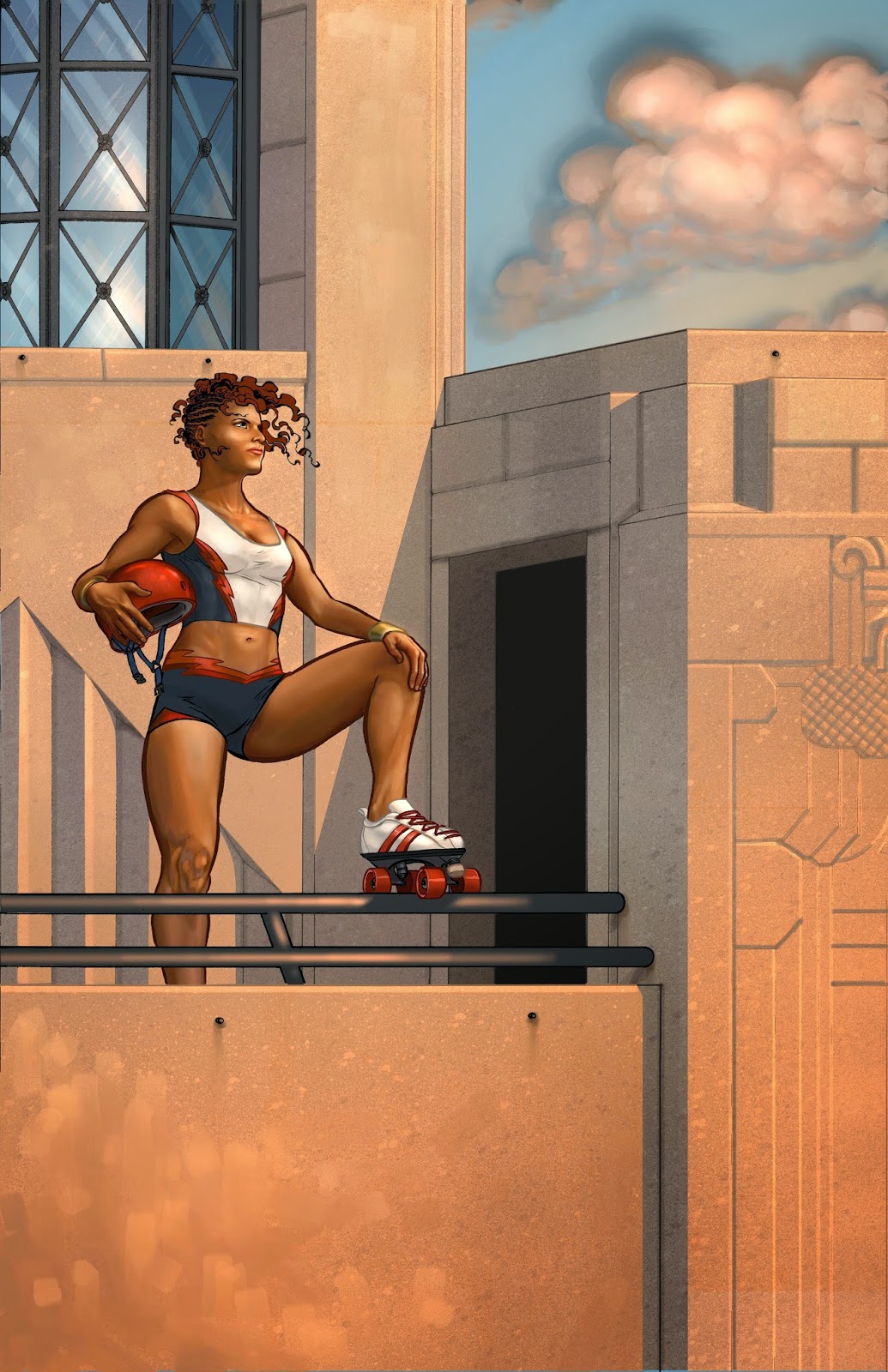 So... Hey... I was supposed to have this done months ago. I had major troubles coming up with a theme, a composition, all of it. Finally I decided the dang theme was irrelevant, and the piece just needed to address two things: Roller derby, and Providence. Boom, done. (Six months later. Gulp.)

Posted by Alison Blackwell at 1:08 PM No comments:

You Have All the Weapons You Need, Now Fight.

So, I’m a pretty good jammer. But I’m not the world’s best jammer, and you might think that I’d be a bit better considering the number of years I’ve spent playing derby.

Conceptually, I understand jamming pretty darn well. I’ve watched and studied and practiced movements and footwork, breathing through explosive movements to avoid gassing out, slowly but surely improving my sprint form, etc. I get tripped up, as many do, when applying these concepts practically in live jams.

If you ask a top-level player what you can do to become a better jammer, odds are good that she or he will tell you:
a) Study and practice
b) The power was within you all along.

If you are already doing a) study and practice, then b) the power was within you all along is one of the single most frustrating things to hear. Included in this are all the other vague and nebulous clichés about learning to unlock your inner potential.

Last year, at the Northeast Derby Convention, I attended one of Smarty Pants’s on-skates classes, and towards the end, she mentioned that most of us are playing at about 70 percent of our ability. Tapping into the remaining 30 percent is what will make a skater great instead of merely decent. Upon hearing this for the first time, I felt empowered and inspired. “How great!” I thought, because I love numbers, “A clearly delineated percentage of how much better I can be! And to think, that last 30 percent was within me… all… along. DAMMIT!”

The idea of having a secret well of power deep inside your person is a very attractive one, but when you have no idea how to access it, you will find yourself pounding on the door in frustration.

It wasn’t until an entire year passed that I began to understand what it means to make an action plan for reaching one’s potential. But don’t get too excited! It is a process, not a single silver bullet solution.

At this year’s Derby Convention, I was lucky enough to skate in the all-star bout with all the other coaches and a select group of convention attendees. I was shitting my pants with nerves, mostly because I felt I didn’t belong- but that’s a whole other blog post! In my first jam, I was in the pack as a blocker, and Smarty was the opposing jammer. Several times in that jam, I walled up with my teammates and thought, “OK, here she comes. We’re so ready. She’s going to hit our wall and eat shit. Yusssss.”

She didn’t, though. Each time she hit the pack, I felt a very sudden impact on the side of my body and looked up in confusion as she skated away, having broken the entire pack in not more than a second.

In derby and in MMA, when stuff happens to me that I don’t like or understand, I’ll stay awake thinking about it for many nights in a row. So I thought about this before going to sleep for a few weeks, and these were the thoughts and questions that ran through my mind:

Okay, so probably this whole “recruiting power from your muscles” thing is legit. (This was another of Smarty’s classes, which everyone should take if the opportunity arises.) But those principles weren’t necessarily new to me, just framed in a more palatable way.

Smarty’s jamming technique isn’t a secret… Most superstars’ techniques aren’t secret. There’s no “five finger exploding pack” technique from a temple in China. Why can’t I figure out how to emulate it?

Granted, these folks are in really good shape, but at the same time, I’m working out quite a bit as well. With men! And iron! And punching! And sprinting! I’m also committing to learning new skating skills all the time. I put in the work. I’m not a slouch. Why am I getting stuck so often?

And then it hit me. That last 30 percent? It’s not skill, strength, or speed. All of those things are the 70 percent that you should already have. That 30 percent is the confidence and the will to USE the weapons in your arsenal. And that’s the part that I’m missing. It’s like I’m a knight who trains all the time and then as soon as I reach the battlefield, I go, “NOPE. Nope nope nope.”

A prime example happened last night at practice when a teammate pointed out to me that when opposing blockers try to block me to the outside, I start to use the Mohawk turn to get out of it, but then halfway through I turn back around and let them have the position in front of me, whereas if I had just finished the turn, I’d be free.

So here’s the solution: Take the opportunities, and accept the risks that come with them. Practice is a safe place to try and fail. So for home season, my goal is to finish the Mohawk turn. To hit the wall at full speed instead of stopping in front of them and giving them time to assess my intent and stop me. To take the apex jump every time it becomes available instead of deciding to go through the middle instead. And if I fail, so fucking what? That’s the point of practice.

If you decide that this approach is something necessary for your derby journey, accept that it is a process. I expect to get worse before I get better, and you should as well. No one will fault you for failing spectacularly. A person who tries something awesome and fails is still worthy of respect, especially if the feat attempted is something others are not yet ready to try. So go get that 30 percent! It is yours, after all, and it was within you all along. 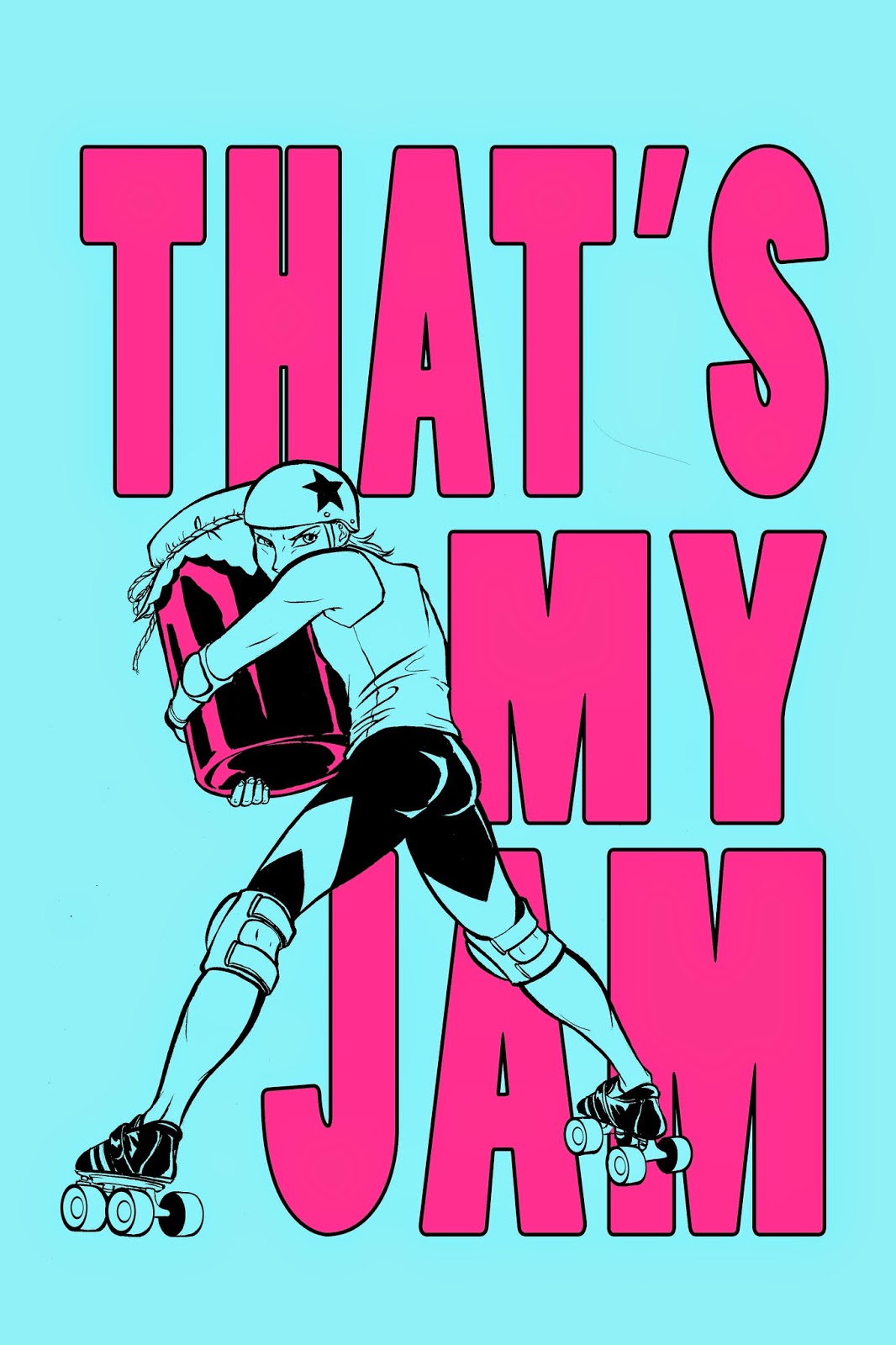 Been a busy little bee lately, and figured it was okay to post some shirt designs I've done over the past few months! First up is one I co-designed with Bunni for her Thrillerparty line; she has mostly done amazing leggings (http://www.thrillerparty.com) and wanted to do a shirt or two to debut at the Northeast Derby Convention. The idea was Bunni's, and I got to draw it and see it on bunches of derbs at the convention! Very cool! 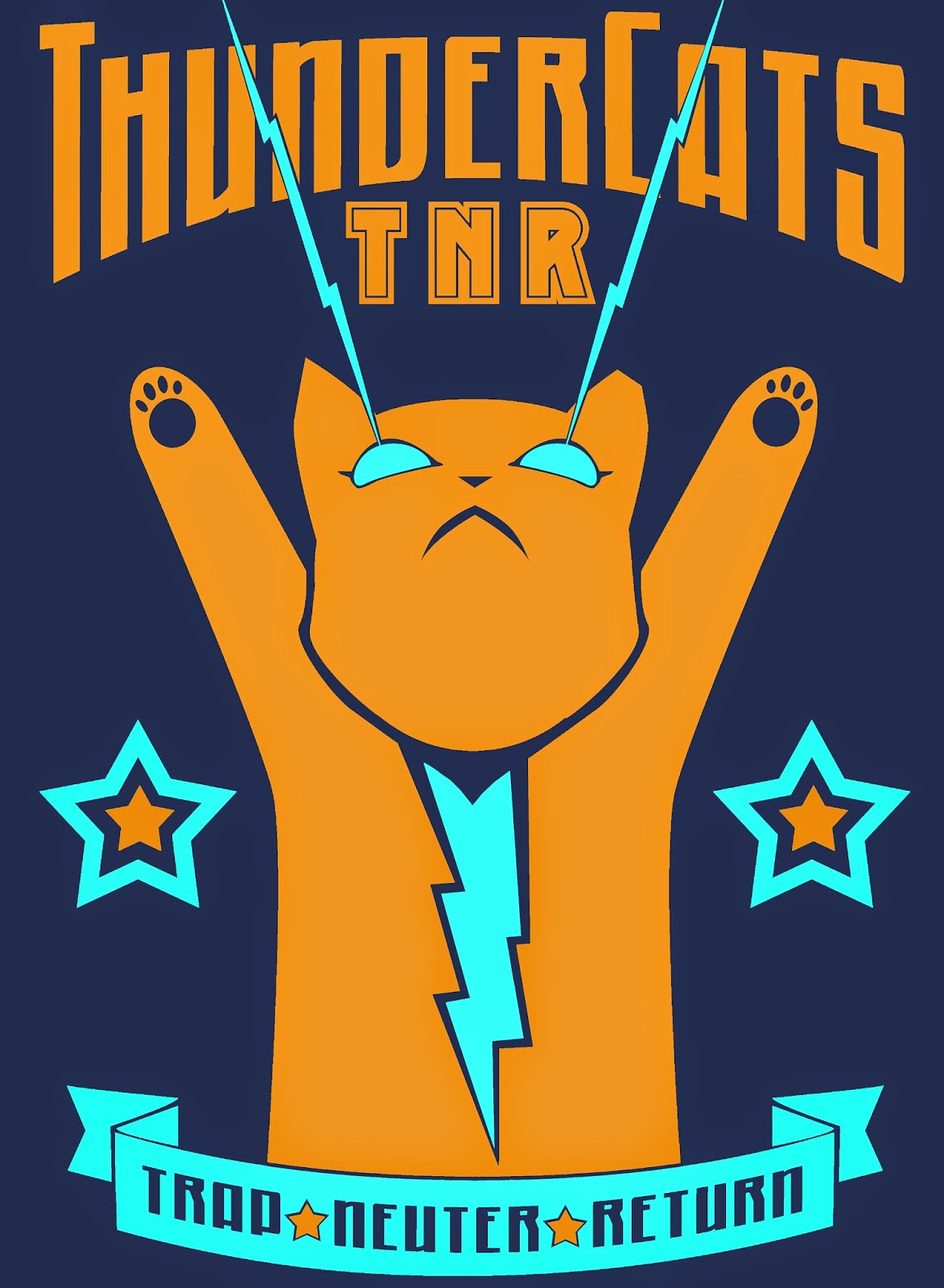 Next was one from the winter, which will hopefully end up as a fundraiser shirt for ThunderCats TNR, a trap-neuter-return initiative run by Bonnie Thunders and OMG WTF. (http://fundly.com/thundercats-tnr) I was really impressed with the work these two ladies were doing to preserve and manage feral cat colonies in their neighborhood, so I designed them a logo to go along with their cool name. Straight up, there's no reason to euthanize feral cats. You go, girls! 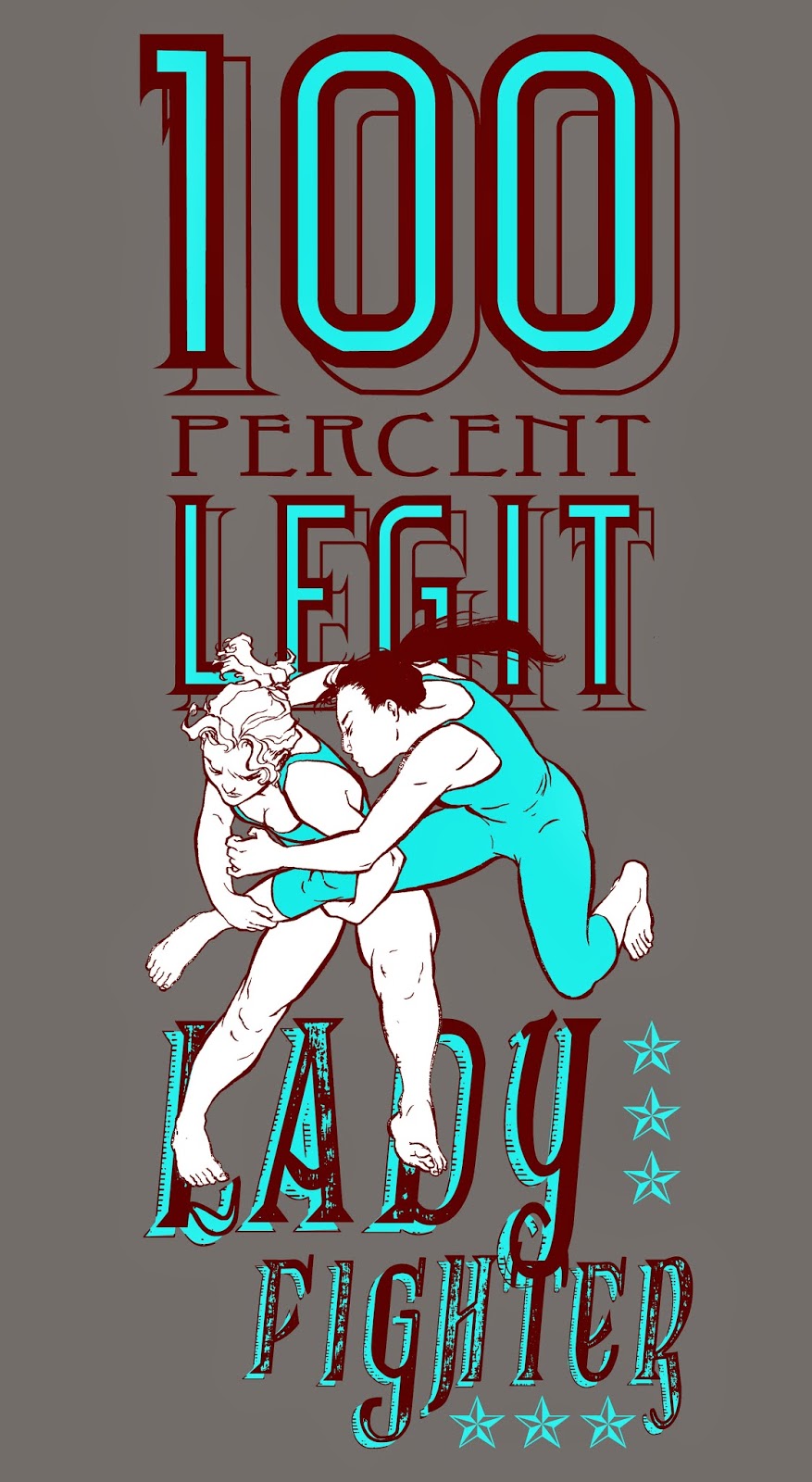 Lastly, this is a design I threw together just tonight using an ancient drawing from my senior RISD portfolio. If this gets made I'd want to re-draw the fighters, but it's just an idea right now. I wanted to design a fun ladies' MMA shirt that wasn't pink. I'm still new to this sport and already I'm weary of slogans like "Fight Like a Girl." I'm not a girl, I'm a grown-ass woman, and I want a shirt that reflects that!
Posted by Alison Blackwell at 7:07 PM 1 comment: 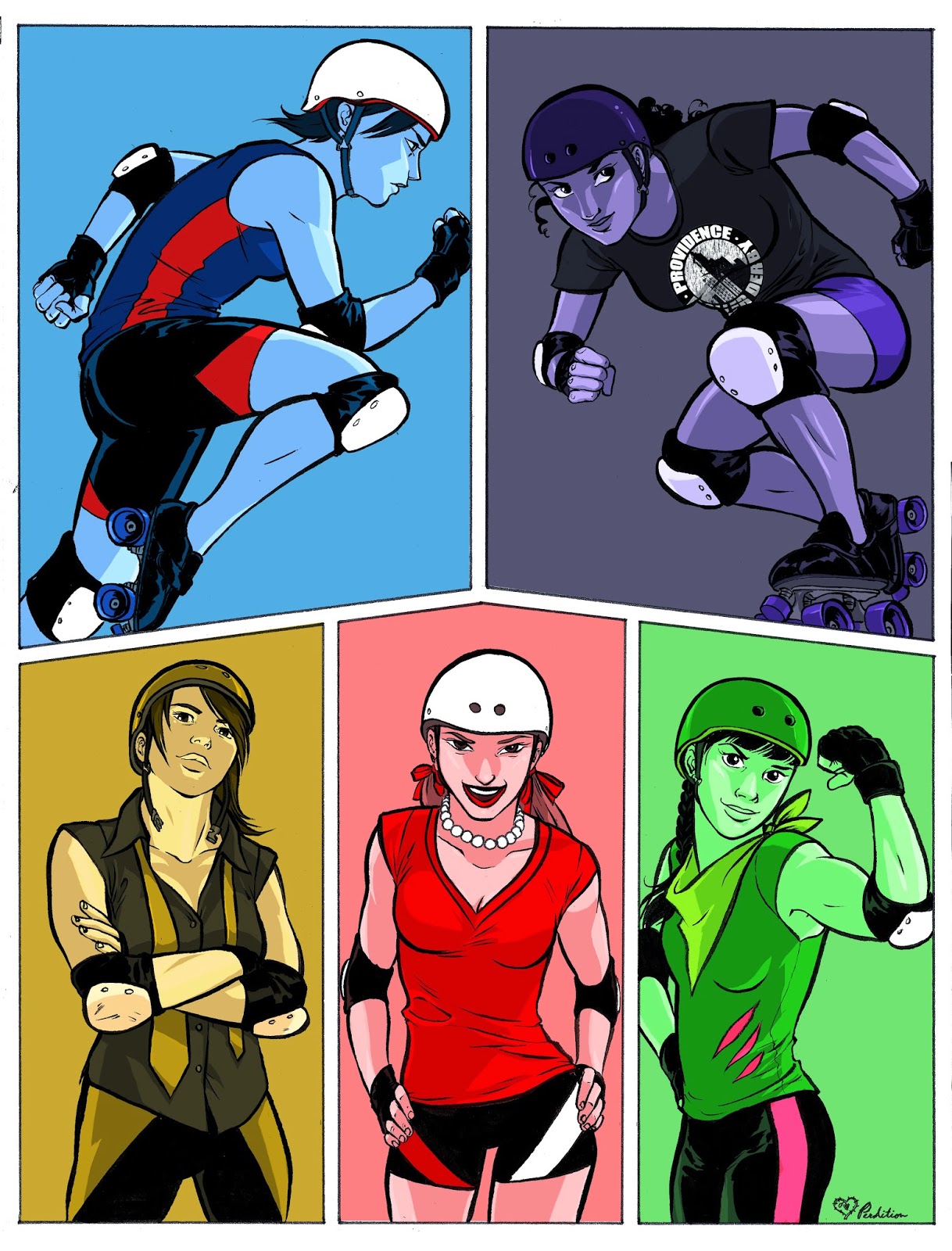 A quick cover illustration for Motif's May derby issue! We gots all the teams! Rocky Point Rollers are in purple rather than black & grey, because it just worked better with the other colors. 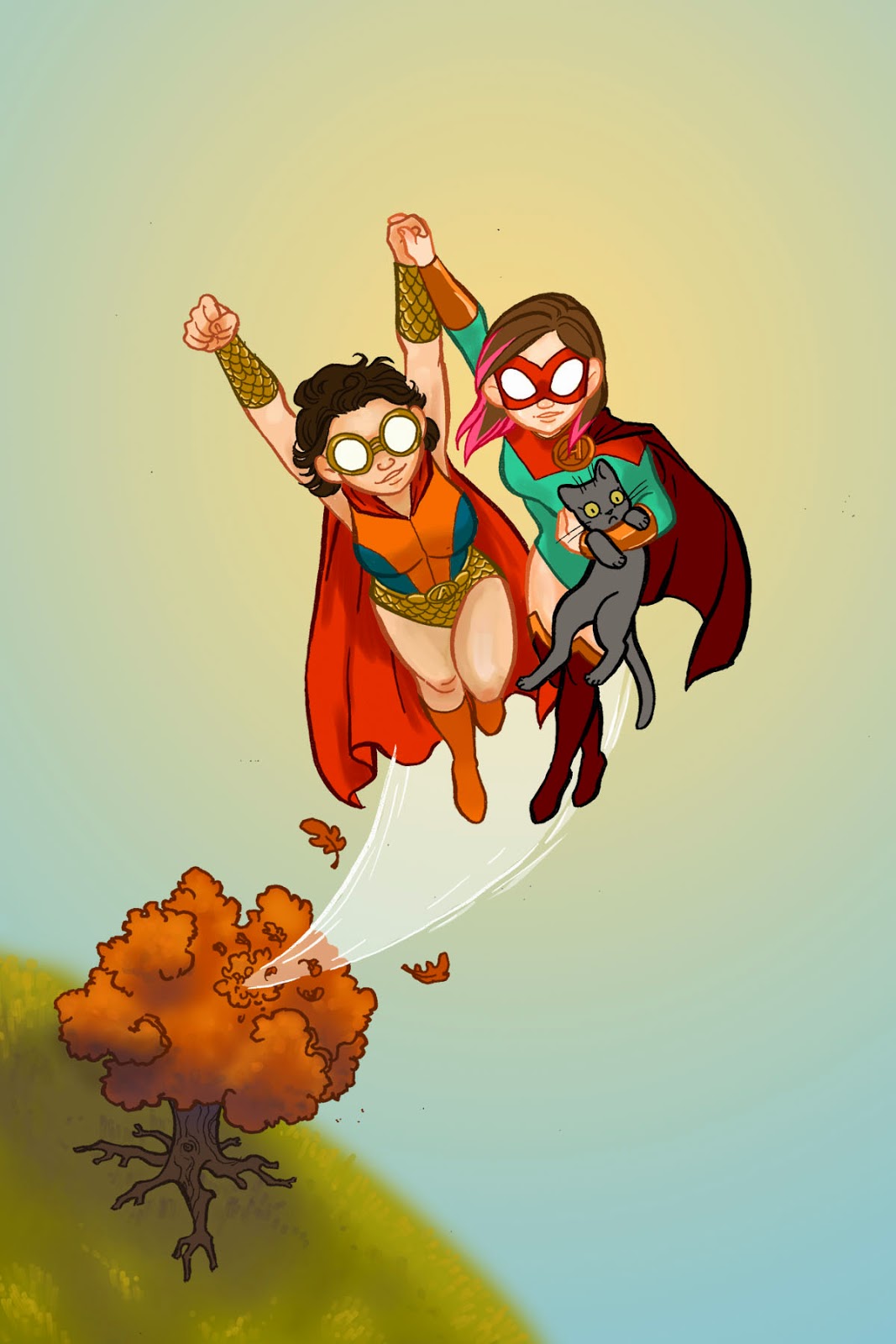 Audra and I are saving my cat from a tree! Kitty is still a little stressed out.
Posted by Alison Blackwell at 6:19 AM No comments: 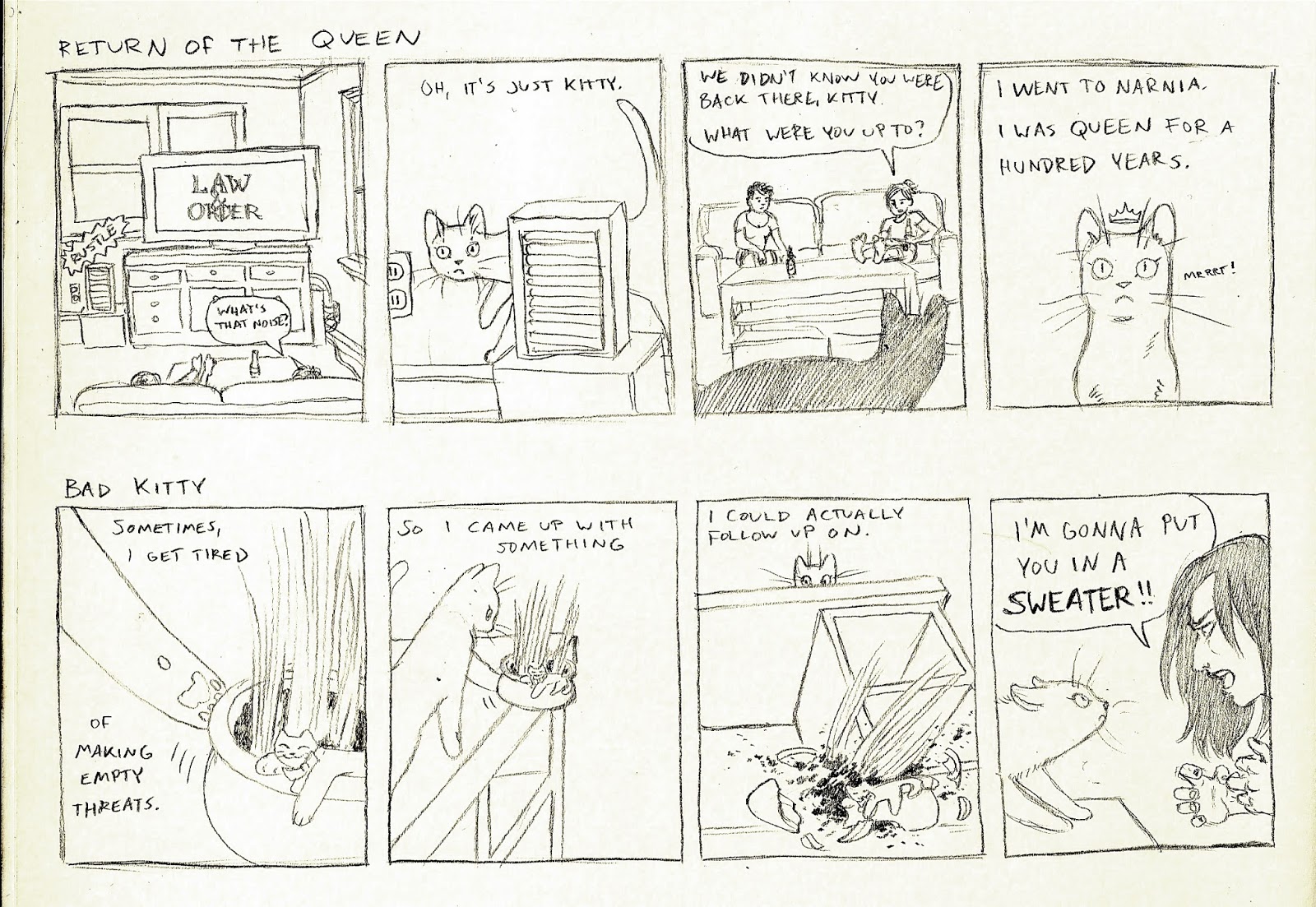 I love my cat. I figure maybe instead of talking about her ALL THE TIME, I could exercise some restraint and save some of my cat stories for comics every now and then.

Posted by Alison Blackwell at 10:07 AM No comments: 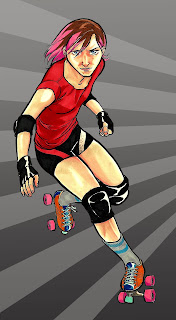 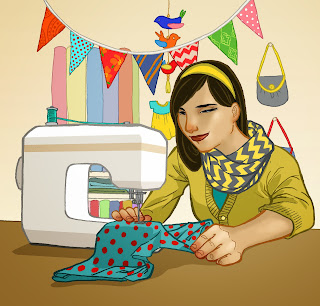 Posted by Alison Blackwell at 8:50 AM No comments: