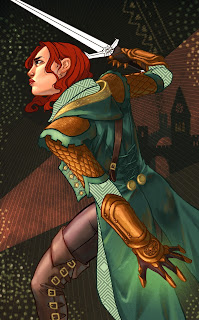 Let go of my life, Dragon Age.
Posted by Alison Blackwell at 11:20 AM No comments: 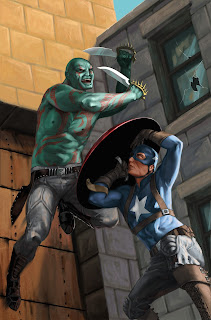 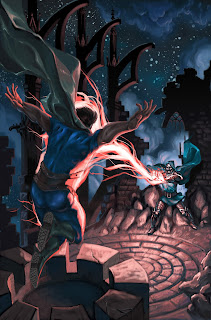 I had the opportunity to create some test covers for Marvel a little while ago, and I'm only just now posting them because... I dunno, I'm sorta shy about them, I guess. I'm still waiting on feedback for the last two, so I'm expecting to make a couple more passes before they're finished for real. Ms. Marvel is on draft two. Almost there, maybe?
Posted by Alison Blackwell at 9:12 AM 1 comment: 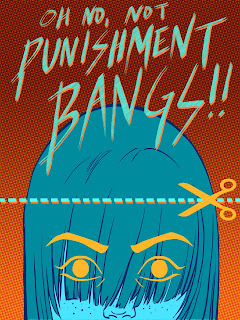 Posted by Alison Blackwell at 9:07 AM No comments: 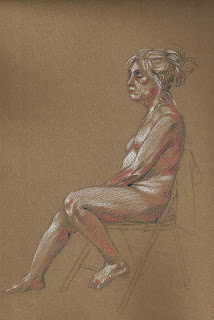 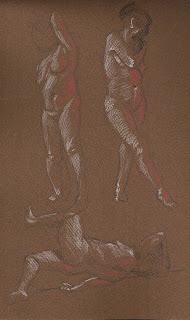 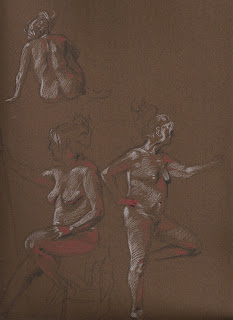 It is good exercise for your artbrain.
Posted by Alison Blackwell at 8:02 AM No comments: 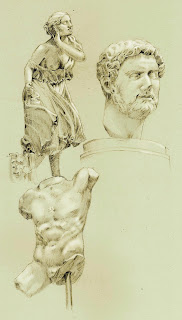 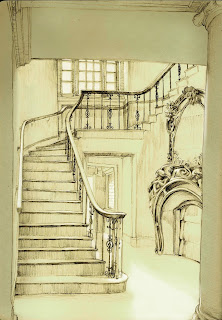 Was in an art rut, so I finally used my free membership to the museum. This was fun, but my back sure felt those two hours or so. :/
Posted by Alison Blackwell at 1:26 PM No comments: 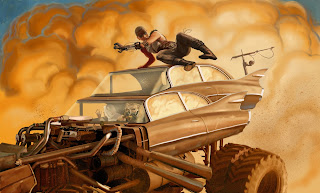 Posted by Alison Blackwell at 10:33 AM No comments: 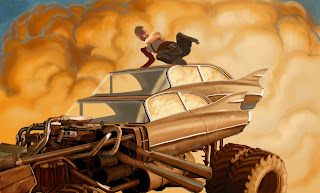 WIP, still... Leaving the characters for last because they are the easiest and most fun part. I am seriously like 90 percent done with the Gigahorse... It started off crummy, but towards the end it was pretty fun!
Posted by Alison Blackwell at 9:18 AM No comments: 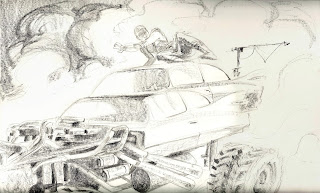 WIP! So excited to paint this right now. HNGGNNGNGGG

Posted by Alison Blackwell at 1:18 PM No comments: 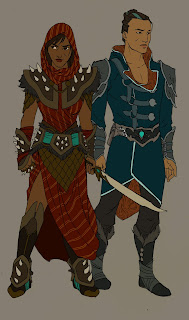 So, this is supposed to be a warrior/bodyguard and a sorcerer, buuuut he came off looking a little like Siegfried and/or Roy. All we are missing is a tiger and a boatload of airbrush.
Posted by Alison Blackwell at 11:20 AM 3 comments: 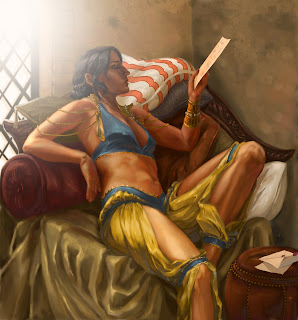 Posted by Alison Blackwell at 10:35 AM No comments: 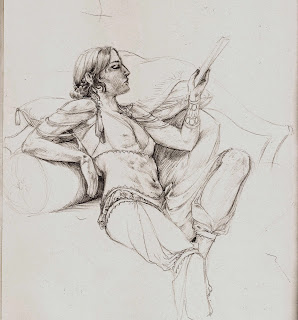 Sketch for a finished piece, featuring Josephine Montilyet from Dragon Age: Inquisition, the video game that ruined my life. 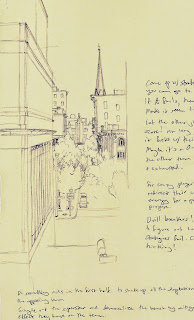 Got in some sketching at the Northeast Derby Convention. I love my beautiful city. 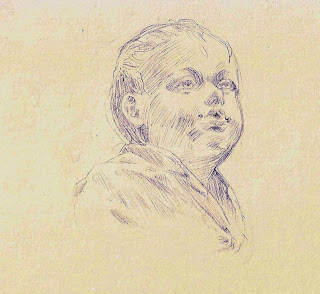 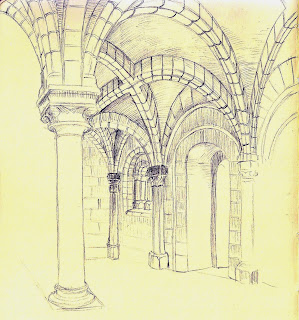 The French Chapter House at the Worcester Art Museum. There was a choral concert going on that day while I was drawing; it was lovely.
Posted by Alison Blackwell at 7:14 AM No comments: 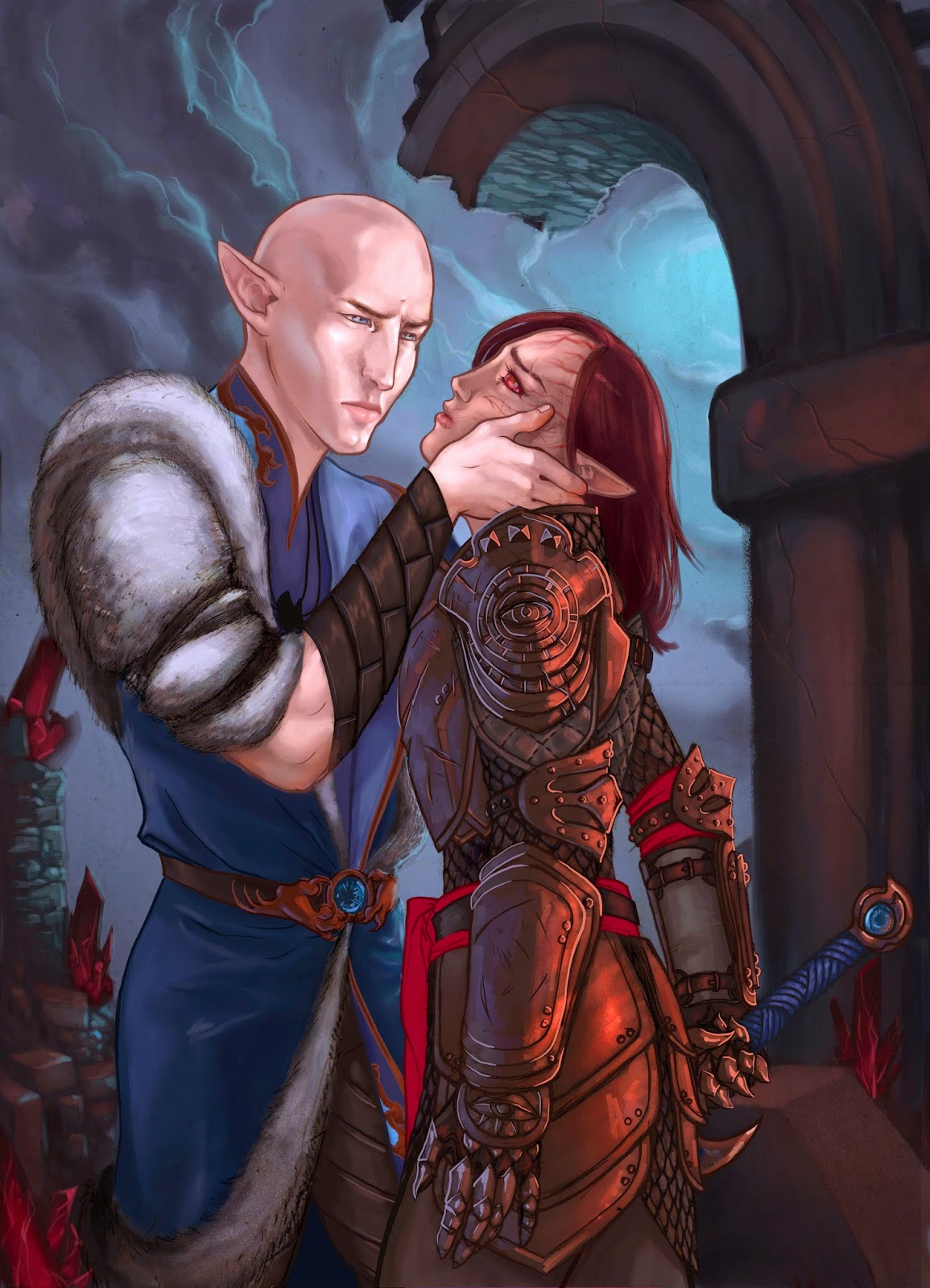 I have succumbed to the Dragon Age obsession and one of my new favorite things is making Solasmancers cry. I find the character prickly and irritating, but on the other hand, he's pretty hot sometimes, so I can totally see the appeal. Tragic love! Wooooeeeeeee...

Posted by Alison Blackwell at 10:20 AM No comments:

Quickie for a derby cover 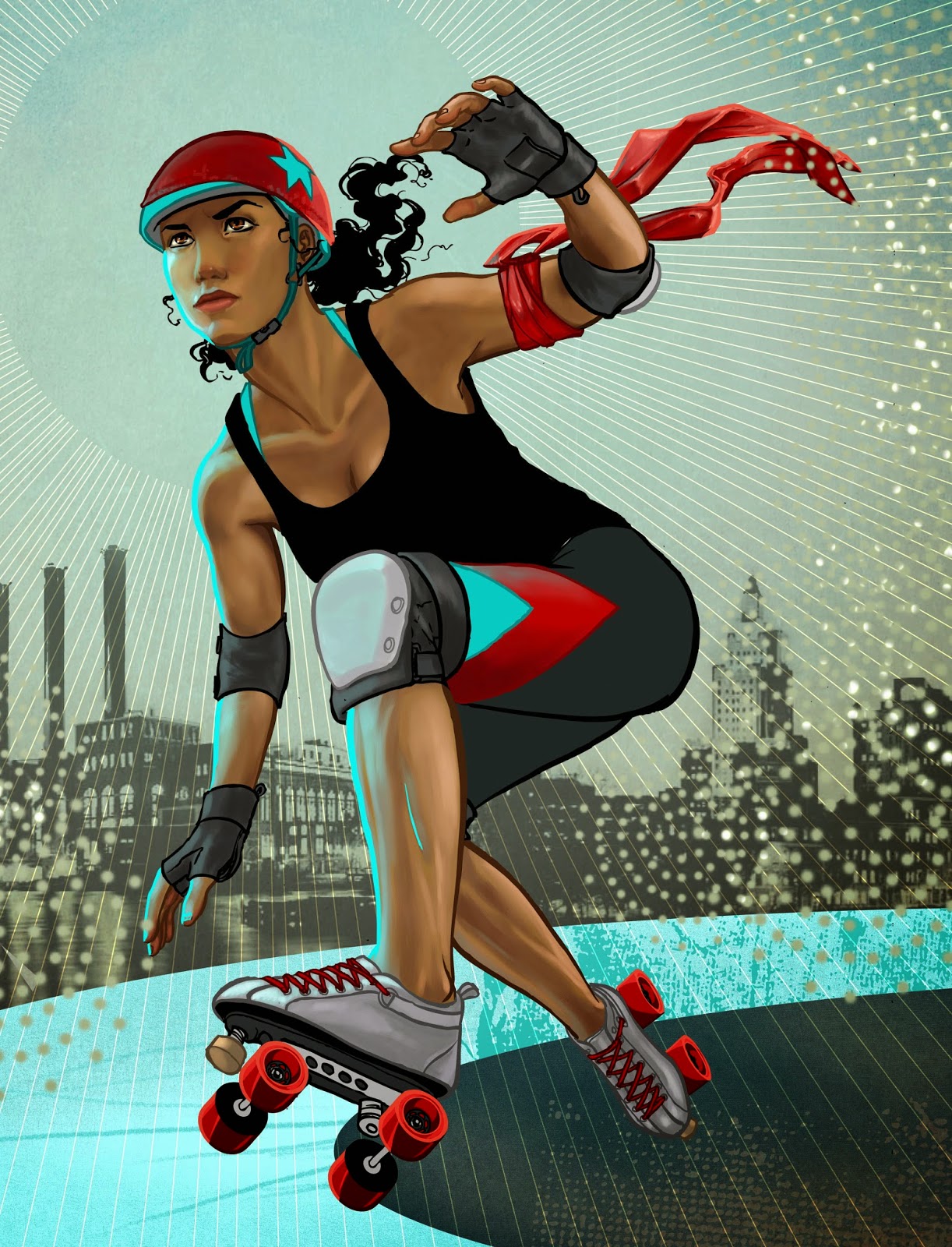 Here's an attractive lady to put on the cover of Motif's derby issue! You jump that apex, woman! By the way, I made that sunburst and additional decorative elements myself in a spectacularly bad decision regarding time management. EVERY LINE. Ugh. And I do it every time, too. You would think I'd make ONE sunburst, save it, and repurpose it from time to time. No, that would be a smart people decision. :/
Posted by Alison Blackwell at 4:03 PM No comments: 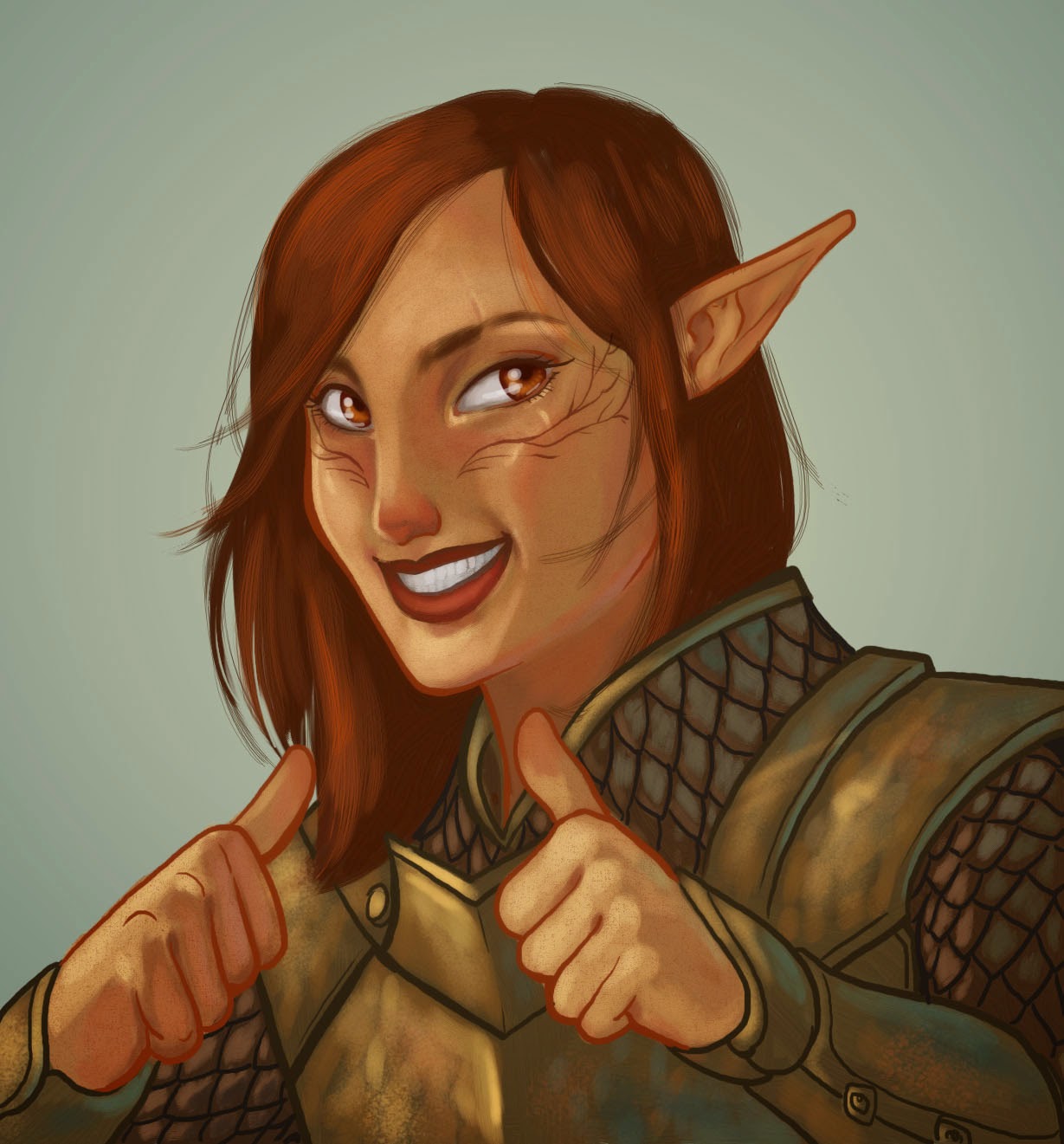 A quickie of my stupid Inquisitor. It ain't perfect, but neither is she.
Posted by Alison Blackwell at 1:33 PM No comments:

For the record, I hate this question. Makes me want to answer back, "Odd jobs, mostly. But I'll do a normal person, too, in a pinch."
Posted by Alison Blackwell at 9:45 AM No comments:

Being a newbie at video game RPGs, I never knew you could get your heart broken by a video game character... I had to process my feelings the way any nerd does: with comics and fanfiction.

Twigs Lavellan stood on the ramparts for some time, feeling the impact of the Seeker’s words. The wind ruffled her silky chestnut hair and chilled her narrow elven shoulders. She had an inkling of Cassandra’s feelings and had anticipated this outcome, but she hadn’t known it would hurt so much.
I could throw myself from the battlements, she mused. But then who would lead the Inquisition? She could not consider such a selfish act. I may be a bumbling fool, but I am the bumbling fool that Thedas needs right now.

As the late afternoon grew colder, Twigs found her feet and went back inside the keep, finding herself in Grand Enchanter Vivienne’s lofted study.

“Any chance you and I might…” the dainty elf’s lilting voice stumbled through one of the most awkward romantic overtures Vivienne had ever heard. Entertaining as it was to watch such an exquisitely formed idiot suffer so nakedly in front of her, the Grand Enchanter had to put her out of her misery.

“Oh darling, don’t be ridiculous. What use could you possibly be to me?”

Twigs rolled one of her slim brown ankles on the stairs beating a hasty retreat from Madame De Fer’s study. Limping, she made her way to Solas’s Fade-a-torium and addressed the elven mage.

“I’d like to know more about you, Solas,” she began, fixing him with her sparkling amber eyes. This time she would not be so forward. She sat down at the table.

“Perhaps you would like to know about my travels in the Fade. Let me tell you about a spirit I met while in a village in the Free Marches…”
Half an hour later, Twigs lifted her finely boned chin from the table and shook her head. Had she fallen asleep?
“I’m glad you find my stories so riveting, Inquisitor,” Solas intoned reproachfully. “By your leave. I have work to do.”

Feeling utterly dejected, Twigs ventured out into the Frostbacks for a walk. Some solitude out in nature would do her good, she thought. As she rounded a turn in the mountain path, a plaintive squealing cry reached her gracefully pointed ears. Searching for the source of the sound, her eyes lit upon a young nug on a mountain ledge about ten feet above her. The poor animal was pacing and trying desperately to scramble back up the rock face from whence it had fallen.
“I know what that’s like, little friend,” said Twigs knowingly.
With a soft voice, Twigs calmed the little nug as she hopped from ledge to ledge to reach it. What was a treacherous distance for the small animal was no trouble at all for the elf. She climbed back down one-handed, cradling the nug in the crook of her slender arm.
In gratitude, the nug happily nuzzled her luminous skin, smearing it with a mixture of snot and saliva.
“You won’t step on my heart, will you, little nug?” asked Twigs. It was a rhetorical question. The nug would now follow its savior anywhere.

In the following months, the Inquisitor would defect from the army she had built, retreating to a cabin in the deep Fereldan woodlands. The Inquisition defeated Corypheus and the archdemon, but not without significant casualties. Their resources completely expended and forces all but decimated by the end, the Inquisition was forced to disband. Had the legendary idiot Twigs Lavellan stayed, things might have been different.
As for the former leader of the Inquisition, she was last seen buying nug feed in bulk from Fereldan merchants and wearing a jerkin with three nugs and a moon emblazoned upon it. Accompanying her were sixteen nugs in all sizes, including an enormous nug the size of a horse. Inquiries were made as to the beautiful elf’s health and happiness; at this time she is “JUST FINE, THANK YOU,” and single. 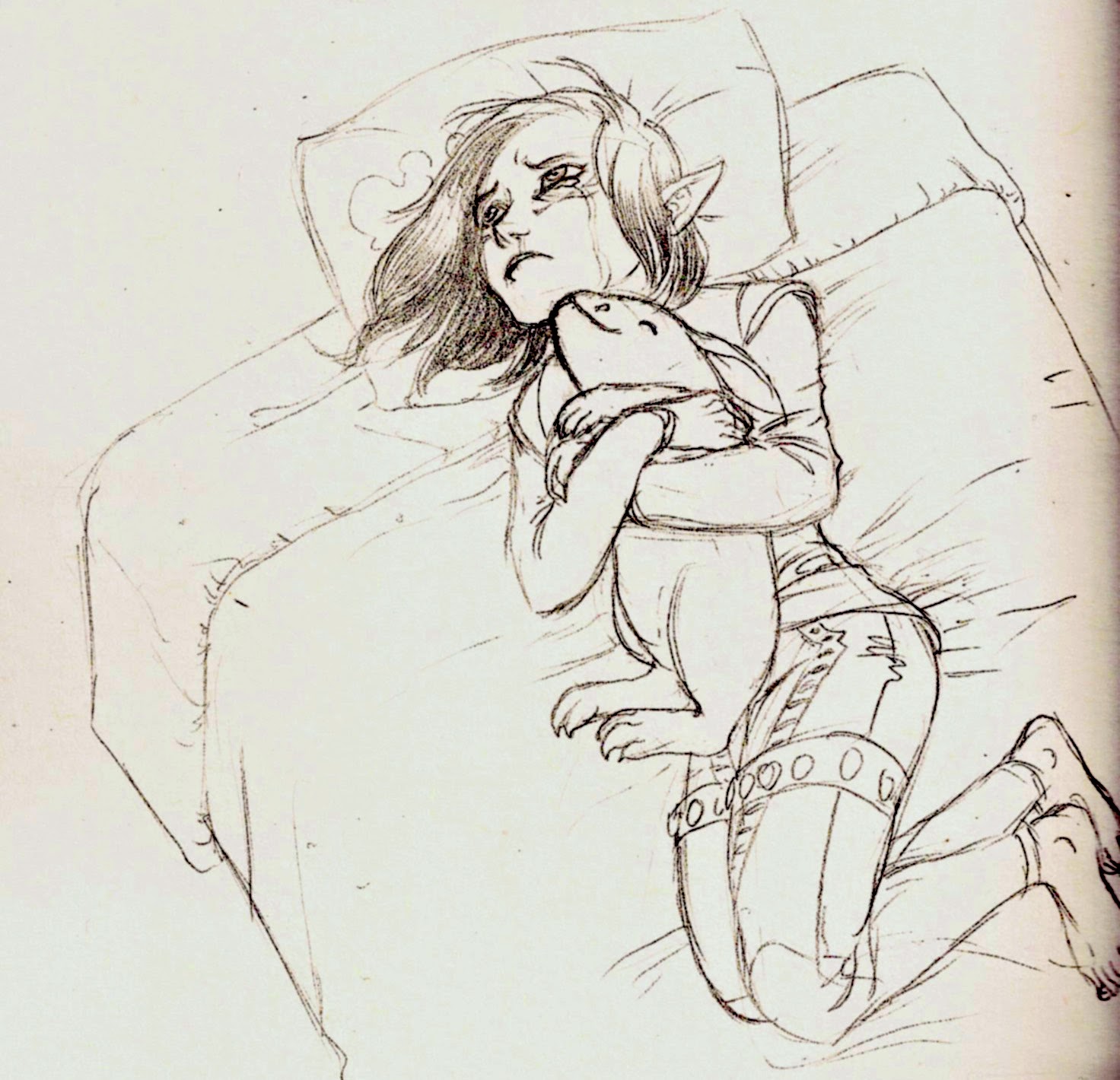 Posted by Alison Blackwell at 8:54 AM 2 comments: 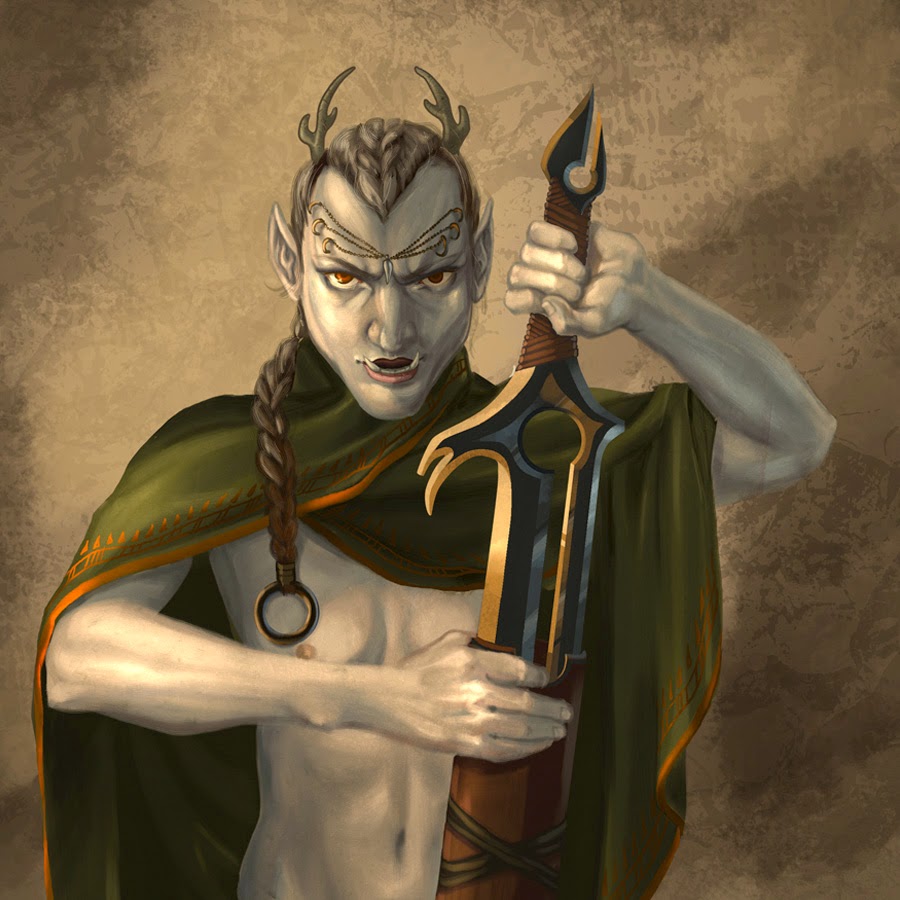 A quickie! Perhaps I'll work into it more at another time. I imagine that orc women run around topless just like the dude orcs. Who is to say their social conventions are the same as ours? I also like to believe that she's a very beautiful and kind orc with many suitors.
Posted by Alison Blackwell at 9:30 AM 1 comment: 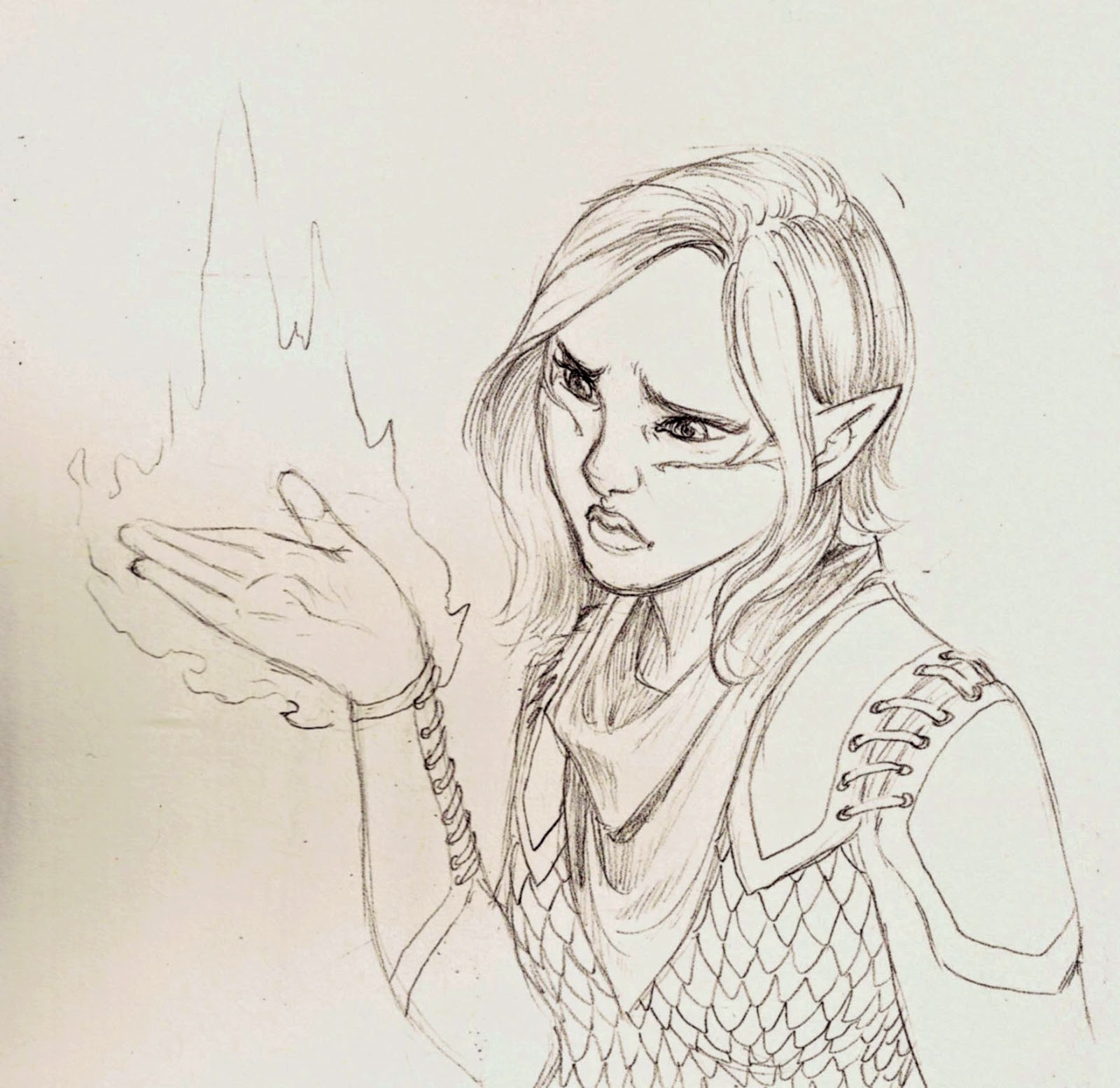 This is a fanfiction I wrote based on my experiences as a first-time open world RPG player.

How could this idiot be the Herald of Andraste? wonders Cassandra. The Maker must be testing us all.

From the moment Twigs Lavellan was apprehended on suspicion of murdering the Divine Justinia, she’s been nothing but trouble. Unable to provide a smidge of useful information, her lusciously lashed elf eyes have registered an expression of barely contained panic that seemed appropriate to her situation at the time. Since then, however, it has become apparent that “deer-in-the-torchlight” is Lavellan’s default setting.

Throughout the course of the quest, Twigs’s party leadership has proven iffy at best, and one wonders if her ineptitude is willful.
“Perhaps we should consult the map,” Cassandra suggests, only to be shouted down.
“I KNOW the shard is around here SOMEWHERE. I FEEL it,” insists the elf, her shapely backside sliding once more down the steep cliff face she had tried to scale.

After a few minor skirmishes, Cassandra came to realize that Lavellan could not possibly have murdered the Divine; indeed she could barely defeat a garden variety highway bandit. Once, during a fight, Cassandra observed the elf’s lithe limbs seemingly out of her control, propelling her in wild circles while slashing at nothing.
“The fight is that way,” Solas directed, as the Herald ran directly into the path of his freezing spell.

“The only way to the last beacon is through the water,” Cassandra points out, referring to the distant shapes barely visible through the mist of the Fallow Mire.
“But I don’t WANNA go through the water!” whines the elf, her full pink lips pouting with all their might. “If we go in the water, the zombies come out!”
“We can dispatch the undead easily,” urges Cassandra, the toe of her boot hovering above the surface of the brackish pool.
“Ennnhhhhh… But they gross me out!”

Twigs Lavellan claims her ignorance of current political strife is due to her loss of memory after the events of the conclave, but at times it is exhausting to keep answering her questions.
“Tell me about the Chantry.”
“Who are the Templars?”
“What’s an apostate?”
“How do I sell this crap I found?”
“What’s a gruffalo?”

Her perfect brows furrowed, the Herald surveys her surroundings. Cassandra watches patiently as the elf is pulled toward the edge of the scaffolding by an unseen force.
“What is it, Herald?”
“There’s some kind of important item around here, I can FEEL it.”
“Is it over there?” Cassandra gestures toward a glowing scroll on a piece of scaffold directly ahead. The boards in front of it have fallen away to the ground several hundred feet below. It’s a treacherous gap, but a decent standing long jump could get a person across.
“That looks dangerous,” says the elf, and presses forward, instantly joining the missing boards.
“It looks like your journey has ended,” says Solas, his voice full of regret.
Cassandra and the remaining party members offered a prayer for the departed Herald of Andraste. So beautiful. So, so dumb.

Posted by Alison Blackwell at 11:21 AM 2 comments: