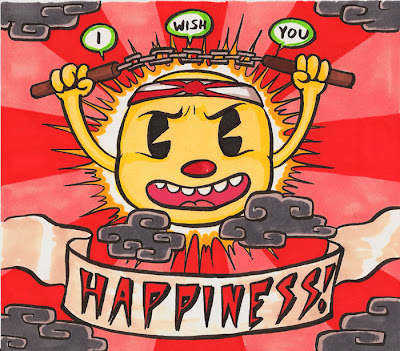 Would you buy a card featuring nunchucks of happiness? What about "You were lovely hosts"?
What about this one? 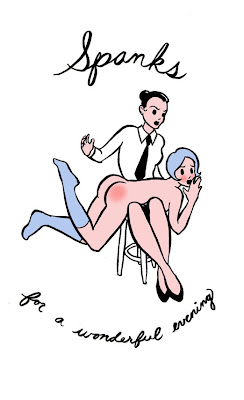 I have made a lot of cards for folks and some say I should make a line of slightly deranged notecards. I'm thinking about it.
Posted by Alison Blackwell at 5:15 PM 2 comments: 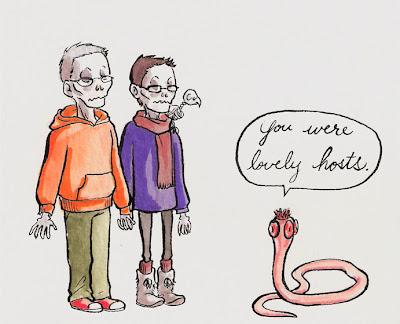 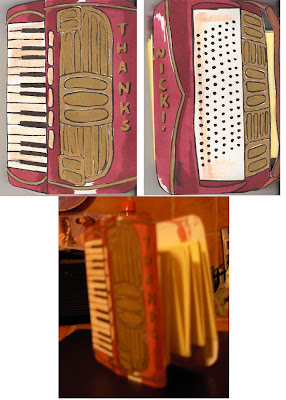 So, this isn't a *real* blog update, but I thought it'd be fun to post some of the thank-you notes I've made people recently. People are nice to me a lot. Unfortunately I didn't scan Gabby's sushi note, but what the hey. Also, my photography skills are teh suck.
Posted by Alison Blackwell at 10:49 AM 2 comments:

Can you cats live without a blargh update for a couple of weeks? I'm going to take a break from the portfoliolioverhaul. In the meantime, look for the tattooed hipsters on the cover of the Weekly Dig!
Posted by Alison Blackwell at 4:57 AM No comments: 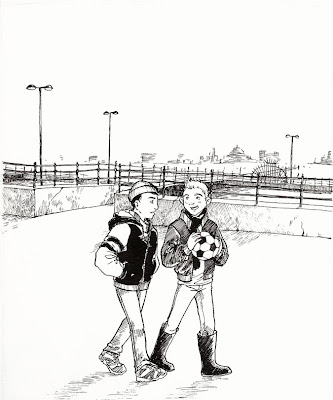 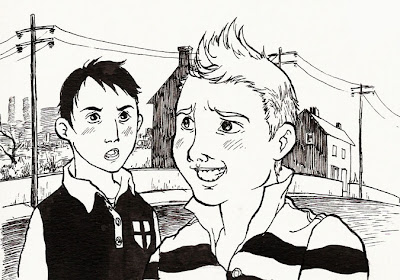 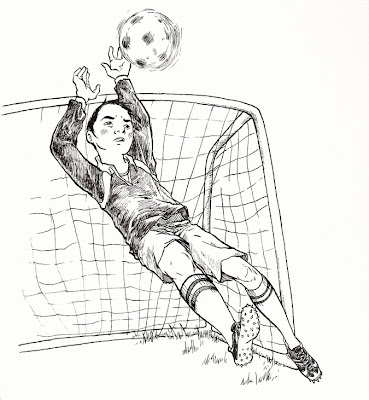 This is just a series of little ink drawings for a short story I've been knocking around about kids who experience racial tension on a soccer team.
These next ones are mostly from a drink and draw session. (We like to call them DaDS.) Also, I regret that I didn't label it on the page, but "shit-faced potentate" was an epithet Andy used to describe a former employer. I thought it was funny so I wrote it down. 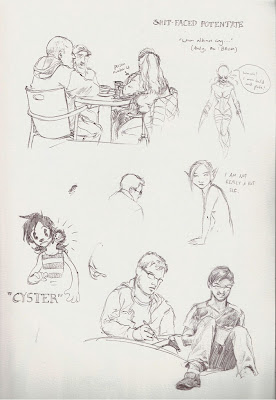 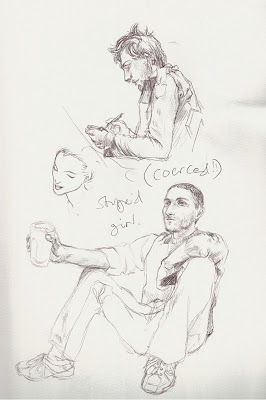 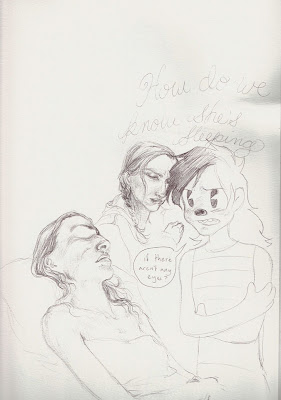 The thing about DaDS is that they start out earnestly enough, but by the end though you are more prolific, your skill level deteriorates until you have nothing but vulgar scribbles. This was one of the better pages, which has contributions from Keith, Colin, Angela and Aidan. I feel I have to point out Keith's car in the bottom left. I was impressed that he could draw it so well without reference, and under the influence, to boot. 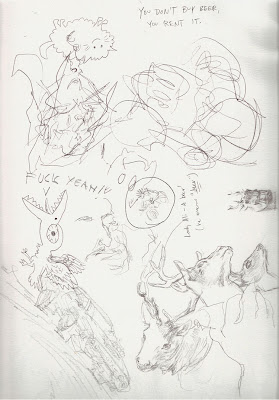 The deer are mine. 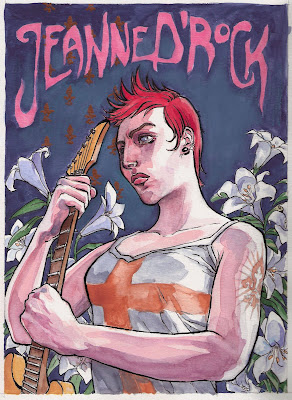 Here is my latest. I was working on some smaller watercolors over the weekend and they sucked so hard I decided to work on something else that was more fun. The cheese factor is pretty high on this one, but cheese? Cheese is delicious.
Posted by Alison Blackwell at 2:54 PM 3 comments: 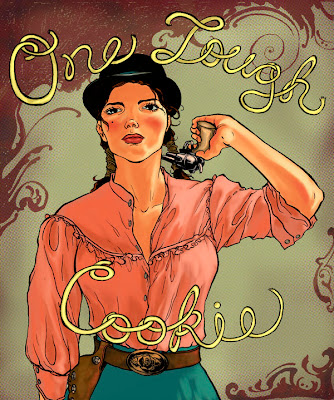 Ugh, finally. Today I was at home trying to be in a good mood when I found "The Quick and The Dead" was on AMC. Man, Sharon Stone was hot. Especially as a gunfighter with a grudge.
Posted by Alison Blackwell at 11:59 AM No comments: 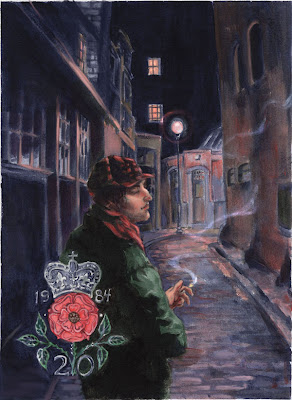 Here is the color version of that sketch posted ever so long ago. Scott said he looked like a cross between Oscar Wilde and Sherlock Holmes (mostly because of the hat), then he said, "Well, he looks gay, anyway." I think I can confidently add him to the list of people who believe the world's greatest fictional detective to be a secret wearer of the green carnation. I'm also on that list. 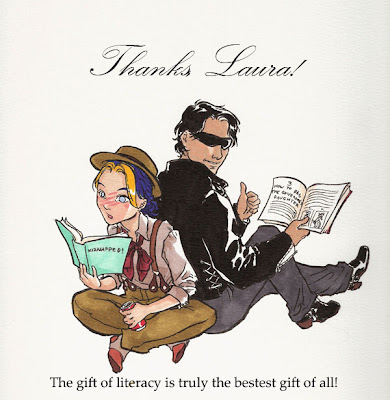 Speaking of which, another on that list gifted me with some lovely books and a sweet card with Eskimo Jones looking forward to a year of adventure. Beacoups thanks, Laura!!!
Posted by Alison Blackwell at 11:57 AM 6 comments: 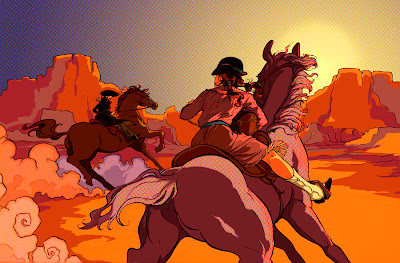 I'm not sure how I feel about the color version. I definitely went NUTS with the Lisa Frank neons. Also, I've spent most of my digital career wondering how get color halftone, but now that I figured it out (thanks to a tutorial in the back of Spider Man Loves Mary Jane) I don't know how I want to use it or how much... I think it's definitely something to be used sparingly, but I have a hard time. It's like lens flares. If I didn't censor myself, there'd be a lens flare on every single surface. Even at night. In a power outage. Inside a black hole.
Posted by Alison Blackwell at 1:25 PM 5 comments: 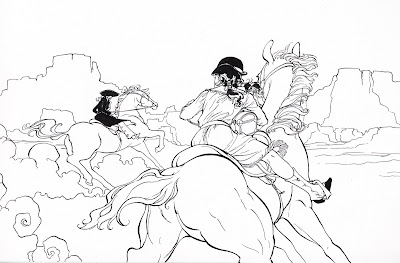 Pony butt.
Working simultaneously on color versions of this, One Tough Cookie, and the tiger piece. It's proving to be pretty difficult. I'm pretty effing rusty with color these days. It's frustrating. I need to get a grip. : (
Lately I've been geeking out about different pen & ink artists (and a few engraving/woodcut-type folks as well) that have been faves of mine for a long time, like Charles Robinson, Gustave Dore, Barry Windsor-Smith, Bernie Wrightson, and Charles Vess. One of the things that vexes me about my own work is that I'd like to be good enough at pen & ink that I accept it as my main act, BUT I feel like you have to be a virtuoso (like the aforementioned) to make ink really work for you. I want to look at one of my ink drawings and think, "This is just as good as a painting." So far, not yet.
Posted by Alison Blackwell at 5:42 PM No comments: