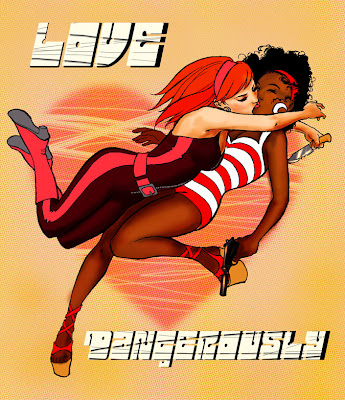 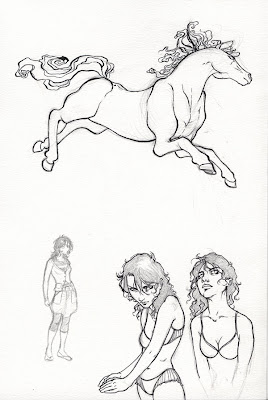 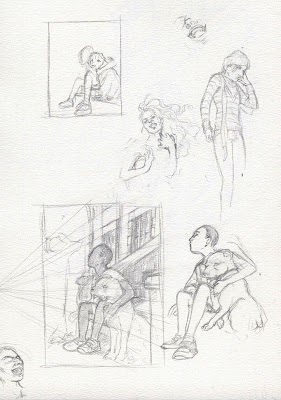 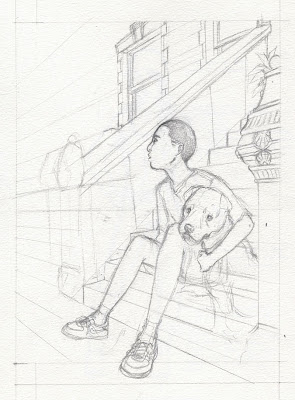 Is it bad that I haven't posted a finish in a while? Sigh... I guess banking, therapy, and accordion check-ups take precedence sometimes. Everything I've just posted is unfinished. The valentine is going to get a bit more slick, a little cleaner, but I like where it's going.

Image number 2: Jenna, it's a bit rough still, but how do you feel about it? Looking at it now, I think I may have to go back to the drawing board... It seemed so great the last time I looked at it but now I'm not really feeling it.(The girls at the bottom are just character sketches, unrelated)

The last two are development sketches for a personal piece I'm working on. Lots of erasing happened. The kid looks like this boy from my 2nd grade class. His name was Pierre and he had a sister named Clarice. Clarice was always a very shy, sweet girl, and quite pretty as well. Pierre was an average 7-year-old boy; playful, annoying. Then their dad up and moved the whole family to Trinidad. They came back for fifth grade and Pierre was different with a capital D. He was all super composed and well-spoken... He conducted himself with a formality that is disarming for any young person, let alone a fifth grader. It was weird. I guess that's just how they roll in Trinidad.
Posted by Alison Blackwell at 8:15 PM

Hey, I've been doing a lot of unfinished sketches as well. Or I have highly ambitious ideas and then I never had any time for them. I'm finally working on something now and I'm hoping to get it done before next week.