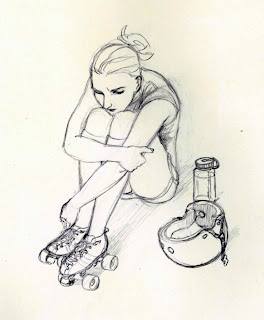 Roller derby is a beautiful sport for many reasons, and has been the catalyst and structure for immense personal growth in thousands of women and men. Derby players will declare their affiliation proudly to anyone who will listen, and effusively gush about the positive influence the sport has had on their lives.  For many, the day they found derby is the day their life started to change. It turned them from a retiring couch potato into a world-class athlete, a shy nerd into a fearless leader, a whiner into a soldier. No one will argue that it becomes a way of life.

It stands to reason, then, that something to which you devote so much time, effort, and love can let you down. I used to joke that derby breaks my heart on average about once every two months. A few years later I stopped joking about it and acknowledged the truth in it. In July, it will be nine years since I first laced up a pair of quad skates. I've broken up with my home league at least once, and seriously considered it several more times. Staying with my league for so long sometimes makes me feel immortal- But only the sad side of it, watching people come and go, watching the same mistakes made over and over, and having difficulty adjusting to all the changes. Is our league better or worse than it was five years ago? Will the style of derby I'm good at become obsolete with rule changes? Which first year skaters will outclass me by the end of the season? How many more times will I be told I'm not good enough? How many injuries can I sustain before I throw in the towel? For that matter, even if I never get injured again, how many derby years do I have left?

Over time, I've come to realize that anything worth pursuing isn't going to be an upward journey the whole time, and that sometimes it's all you can do just to be going forward. Right now I'm having a bad year for my career- I'm trying to get a book published, and trying to break back into freelance illustration with very little success. Rejections come in daily, and my wonderful fiance occasionally has to listen to me cry about how no one will hire me and how I'll always be poor. The next morning, though, I get up and send out more inquiries. I draw ugly snowbanks and stoplights, just to draw something. I keep plodding forward, knowing that it can't be crappy all the time.

I want to be a great derby player. I want to crush the competition. I work hard for this. Harder some times than others, but always hard. Very few people know the extent to which I work outside of practice. Lately, my experience jamming has been dreadful. I've traditionally been a jammer, but since the middle of last season, I've fallen out of love with it. I've had much better years jamming. The next opposing blocker that says something encouraging to me after she's knocked me down might get punched, no matter how good her intentions are. That's how bad it is. But I'll still volunteer to jam, because going forward is better than folding and not going at all. Eventually I'll figure it out. Fortitude and determination are gifts, but neither is greater than the gift of being able to play.

This year, I'll keep pushing forward not because I want to be great, but because I can. It's wonderful to be able to draw and paint. Being able to tell your story through pictures is an amazing gift. So is being healthy enough to play a ridiculous game on roller skates. A lot of truly great players have been forced into retirement because of injuries or life circumstances- Those of us still playing should consider ourselves lucky that we haven't experienced that heartbreak. So maybe I won't be an all-star this year. Maybe not next year either. Maybe a newbie will break my lap record. Maybe I'll go all season without getting lead jammer. It's all possible. But I still get to spend my nights on skates, playing the game. For all your derbs out there, your journey will probably have more downs than ups. But whether you are on a meteoric rise to derby stardom or crashing and burning, always move forward- Because you can.

Posted by Alison Blackwell at 9:51 AM

Good god, this is amazing....you are amazing!

I know I'm a sucker, but thanks for making me cry.

I feel you, girl. It's hard to find new motivations to keep doing the same thing year after year, especially when it just seems to be getting harder. You were one of the gals that recruited me to play derby, and here we are 9 years later on opposite sides of the country still plugging along.

I often think back to the week we watched Mean Girls on repeat and sewed our Mob uniforms together. We were FUCKING KIDS, man- and that was a pretty formative experience for me personally and as a derby skater. Derby nor we will ever go back there, but that doesn't mean what we have ahead isn't just as valuable on our little journey.

It's been secretly inspiring for me to think about you still skating; your tenacity and drive is something I could never even pretend to have. I'm sure that's annoying to hear, but basically what I'm saying is, you're a more fully formed and inspiring person than most. Keep rollin'.

Ah, Jeebus, Dolly. Now you're making ME cry. We totally were kids- We were both only 18 when we started doing this! It's strange and awesome to think that most of our transition into adulthood has been guided and informed by roller derby.
I was really psyched to hear that you were going to skate again. I think B.A.D. is going to be a good fit, even if they root for the wrong football team. Rock on! I can't wait to see what you do.

I just wanted to tell you that I'd never have the balls to even do roller derby... so you are a super badass in my book!

As far as the frustrations of freelance illustration go. I feel you 100%! It can be soul crushing to feel rejected again and again...

But honestly, your work has gotten better and better!!! I'm sooo envious of your drafting and digital painting abilities. I think its all about getting your work infront of the right people. At least thats what I keep telling myself and then I go back to drawing. Anyways, keep at it!