Yes! It's true! I'm posting again, not ten minutes after my initial post. I just wanted to throw in this sketch. I started working on this piece back in October, but halfway through I had to put it on hold for a month. I scanned the finished painting and promptly lost my flash drive, which I only realized after I'd given the painting away as a gift. I was kicking myself for my stupidity, plus I really didn't want to have to further embarrass myself by asking to borrow the painting to re-scan. Amazingly, though, I got an email yesterday from someone who found my drive! It's a Christmas miracle!
I've actually tended to have really good luck with things I've lost. Complete strangers often reaffirm my faith in the human race by returning stuff to me- Stuff I shouldn't be allowed to have because I just lose everything.
So anyway, until I get the drive back and can post the finished piece, here is the sketch. 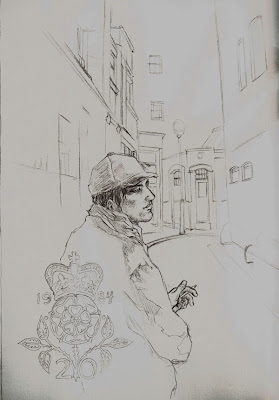 Posted by Alison Blackwell at 10:25 AM