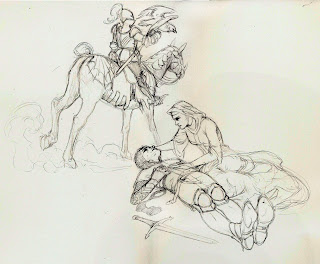 We are all shocked and heartsick about the Boston Marathon bombings. Nothing has felt completely normal since, least of all today, with news of a shootout and subsequent manhunt greeting us in the morning news.

The Boston Marathon has special significance for my family. My parents are both fixtures in the running community, my dad as a coach for collegiate track and field, my mom as a former Olympic hopeful and current masters' level competitor. Mom placed fourth in the Boston Marathon when she was in college, and a BAA print hung in our hallway when I was a kid. My sister and I understood the significance of the event from an early age. It's a dream for people all over the world, not just Boston. My first reaction upon hearing about the bombing was anger. Whomever perpetrated this terrible act had desecrated something that was really special for so many people. No one runs a marathon on a whim one day. The level of dedication required to even qualify for the event comes from a drive deep within. Some people run to find themselves, others run for causes like cancer or autism, and some run because it was something they were born to do.

While waiting for emails and Facebook updates that would account for the people I knew were in Boston, including a dozen or so people from my parents' running club that were participating in the race, I thought back to the 1972 Munich Olympics, where 11 Israeli athletes were killed by a terrorist group. International athletic competition is supposed to be about friendship, international relations, and celebrating the human spirit through incredible physical accomplishments. It is a hallowed place where violence isn't allowed; a church of tears and sweat.

And so I understand the furor of everyone who is either directly affected or following the story unfolding in various media. It's natural for us to want to take up arms like a swarm of avenging angels and vanquish the evil in the world. Of course I feel this way. Nobody wants to stand helplessly by. We all feel the need to DO something. We feel the need to own a part of the tragedy ourselves, even if everyone we knew in Boston was okay, even if we ourselves were hundreds of miles away. We all want to get those evildoers.

And so with the best of intentions, we spread information as fast as we could receive it. The immediacy of Twitter feeds and news blogs meant that facts weren't checked and stories were disseminated without discrimination. I swear I've heard five different versions of the shootout so far today. Several young men were misidentified as suspects, including a young Brown student who went missing from my neighborhood a few weeks ago. Over the past few days, Internet vigilantes demanded investigation into any photo that pictured a man holding a backpack. The story has become a cloud of panic, anger, and needless hurt, all fueled by our collective unwillingness to be helpless. Our warrior spirits are restless, and they want blood.

But here's the thing; unless Dzhokhar Tsarnaev is standing right in front of you, there's not much impact that our warrior spirits can actually have. Why ride off into battle against a foe we can't even see? Could we not instead try to be healers? Enact the good that we believe in and care for the people that are still alive? We can have much more significant effect on this terrible situation if we listen instead of shout, find out where we can do good, and go there rather than into the fray on our chargers, waving our swords into a cloud of smoke. Do one of the community runs. Show solidarity. Comfort people who are having a hard time. Donate money. Do whatever you have to do to banish helplessness and chase away the nightmares. Be a healer, and help.


Posted by Alison Blackwell at 2:10 PM